Every holiday needs some Scrooges, I guess 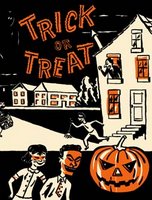 For those of you who like Halloween fun: if you were not overly impressed with yesterday’s virtual pumpkin carver, here’s another that’s more detailed, if less entertaining.

For those of you who don’t like Halloween fun, here’s a news story out of Massachusetts. Apparently, a “handful” of parents complaining that Halloween offended their religious beliefs was enough to get the celebrations cancelled for Underwood Elementary School.

The parents threatened to not send their children to school on that day if the celebration continued.

''When I hear that kids won't come to school because of what we're doing on Halloween, I have a problem with that," Castelline said.

This is just another example of the overextension of political correctness to kowtow to a vocal minority. If the parents want to keep the kids out of school for the day, that’s fine. That’s their prerogative.

While the kids would probably rather be celebrating with their classmates, if that can’t happen I’m sure they’d rather stay home than be “the kids who wrecked Halloween for everyone else.”

I can guarantee that, if you monitor these people for a few years, they will be the same parents who protest sex ed. for their children, and keep them out class that day. They’ll probably soon discover themselves the parents of pregnant teens as well.

Seriously, give these kids a Halloween. You're injecting morality into a holiday that, to a kid, is simply about costumes and candy.
Link to story
Posted by alpharat at 10:46 AM

Several years ago at Longfellow Elementary in Royal Oak, same deal. Who were those cute little girls that weren't allowed to get haircuts and had to wear head scarves and dresses to school every day? Jehova's Witnesses? Anyway, their parents took Halloween away from school. Maybe the kids should have rebelled by dressing up as Jehovas for the day.