Growing up, one room at a time. 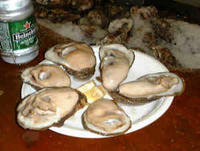 Look out! It's another one of those journal-styled "what I did on my weekend" entries!

I am coming off of a very productive, yet restful weekend. Friday, was payday, and so followed the payday ritual of my wife and I going out for a nice dinner.

This time it was Mitchell’s Fish Market, an excellent seafood place. A plate of raw oysters, an excellent array of seafood, including shrimp, scallops, salmon, mahi mahi; combine that with a couple of cold beers, and I was dead asleep on the couch by 11:00.

Saturday continued the preparations for Iceman. We only had a nine-mile trail ride this time, but it was a good ride. My wife set the pace, and we hammered through at a solid rate without really breaking a sweat, just confirming that training is going as planned, which is good, we only have four more training weekends!

Saturday afternoon called for another platter of raw oysters and some sushi, this time from Tom’s Oyster Bar. Again, cold pints of lager were called for as well. I think lager is the best compliment for raw seafood, don’t you?

Sunday we decided to grow up a little more. After five years in our house, we started painting over the white walls it came with. To be fair, we did the kitchen and bathroom last year, but we’ve been unable to commit to any colors in out main living area.

It was funny how it happened; we went to the Home Depot to pick something up (and we still can’t remember what we were there for originally) and instead left with three gallons of paint and various supplies.

I did a whirlwind move of all the furniture from the dining room to the living room, and a few hours later we had two blue walls and two yellow walls, and a dog running around with one blue paw, and a cat with four yellow paws; and pawprints on the hardwood. It’s cleaned up now.

I grilled up a great dinner Sunday night while we painted, too. A Tuscan beer can chicken. I’m sure everyone here is familiar with basic beer can chicken. If not, here’s a recipe. The Tuscan variation came from bon appetit, which offered a few “upscale” beer can chicken variations, listed here. I skipped the prosciutto ( too expensive), and used white wine because Trader Joe’s was out of Prosecco, but the end result was delicious and low effort on my part.

So does that sound like a weekend of someone who’s finally becoming a grownup? If there’s any doubt, tonight I am touching up some paint in the dining room, and then canning tomatoes! But I will be sure to get mildly drunk while I do so.
Posted by alpharat at 7:38 AM