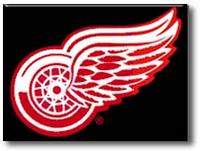 Two more walls were painted in the living room last night; two more walls to go. I don’t know how much painting will get done tonight though; it’s the home opener of the Detroit Redwings!

All of my Detroit visitors will appreciate this, but for my out-of-town readers, Detroit has been hurting for hockey. With the strike last year, we’ve gone 16 months without hockey, and we don’t really have any other sports worth watching. Our Tigers and Lions are horrid, and while the Pistons have done great, with one championship during our hockey hiatus, even, it’s just not the same. Plus, the Pistons don’t even play in Detroit; they’re out in Pontiac.

Redwing fever is taking off. Mickey Redmond was on the radio this morning talking about how excited he is for the new season, how we should probably see some “Old Time Hockey” this season, although there probably won’t be any “Bench-clearing Donnybrooks”.

For those of you out of our broadcast area, you have no idea what a great color commentator Mickey Redmond is. An Old Time Hockey player himself, he is well-known for his "Mickeyisms” (many of which have been compiled here); my all-time favorite is “Coast to coast with buttered toast,” which he uttered a few years ago when Yzerman carried the puck from one goal to the other and scored unassisted.

Speaking of our captain, Yzerman is back. In fact, even with the salary cap, we have a lot of familiar faces coming back. We lost some favorites, such as McCarty, but there are still more familiar faces than new ones.

It’s good to see Ozzy back in net as well (or it will be, once he gets healthy).

All 30 teams are playing tonight; it’s the first time ever this has happened in the history of the NHL, so no matter who your favorite team is (although it probably is the Redwings, if you’re a real hockey fan), tune in tonight and welcome hockey back.
Posted by alpharat at 7:18 AM