The Germans Do It Again - Another breakthrough in beer technology! 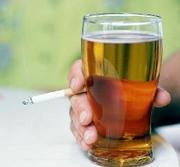 Just a few hours after I reported the advent of interactive beer coasters, Fark posted a story reporting that German Scientists have once again advanced the standard of living for the beer-drinking citizens of the world; this time, it's beer with nicotine.

The scientists claim that the intent is to help smokers quit, rather than make the beer addicitive. I'll buy that, because it's not like you need to add anything to beer to make it addictive. Another possible reason for the beer is to keep your ass glued to a barstool while drinking in a nonsmoking establishment, rather than stepping out for a smoke.

I can see this also really helping those people who claim they only smoke when they drink (and of course they are always saying this as they are reaching across the table to take another one of your smokes).

Regardless of the reason, nice job again Germany. Set one of these on an electronic coaster and heep 'em coming...
Link
Posted by alpharat at 1:40 PM