The Spider is Back - And This Time, He's Out for Blood! 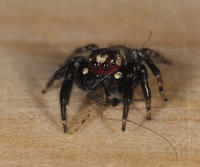 Scientists have discovered a spider in Africa that craves human blood.

This jumping spider actively seeks out mosquitoes that have fed on human blood; it hangs out on tree trunks and buildings, where it stalks its prey, rather than building webs.

Lab experiments conducted near Lake Victoria showed the spider preferred female mosquitoes fed with human blood over all other prey, including male mosquitoes, which don't feed on animal blood. Tests of the spider's prey preferences showed it went for blood-engorged female mosquitoes in 83 percent of cases when offered a choice of two similar-size insects. When it came to making a choice based on smell alone, with the two meal options hidden from view, around 90 percent of jumping spiders selected the blood-filled mosquito.

The article says that this is the first known predator that deliberately feeds on vertebrate blood by eating mosquitoes, and goes on to say that this is the only animal known to select its prey based on what the prey has eaten. That apparently does not include humans, unless these scientists have never tasted milk-fed veal.

Although the spider is currently not a threat to humans, there is no speculation yet as to what will happen when the spider realizes the stuff tastes better on tap than in a bottle.
Link
Posted by alpharat at 12:26 PM

You should write the screenplay!

Opening Scene: A Pretty woman sitting on a bench. Close-Up of a very small spider quietly sucking away at her arm, minding its own business. Only by accident does the woman look down and see this...
"OMIGAWD!!! Make it stop!! The horror!!!" She then passes out...The spider shrugs, moves out of the shot, then ten mosquitoes come along and pick up where the spider left off. Maybe that's not scary enough...How about, the spider walks through a nuclear waste dump at some point during the plotline and grows to be man-sized? The message, of course, not that we should worry about our environment, but that we should fear mutant insects.

Your plague party sounds awesome, by the way.