You can't get there from here (my anti-traffic rant) 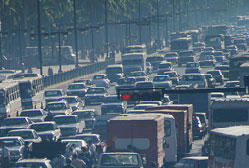 The M-10 is down to one lane, so it takes me 30 minutes longer to get to work now. I spend a lot of time just sitting in traffic lately because of construction, and things are getting worse.

A recent study revealed that Michigan’s roads are headed toward a crisis. Despite constant construction, one-third of Detroit’s roads are listed in “poor” condition. Like I need to tell that to any of my local readers; Detroit’s highways often look like minefields, our traffic reports are filled with warnings of car-eating potholes that cause flat tires and massive backups during rush hour. The shoulders of our expressways are littered with hubcaps shaken from vehicles by the rough terrain (there is a hubcap from my wife’s Scion xb somewhere along the Southfield – if you see it, please let me know).

While I realize that weather and traffic put a strain on Michigan roads, there are better alternatives than the $1.3 billion the state spends on its roads each year. Some of the money could be focused on giving Detroit a viable mass transit system. This would reduce congestion, both reducing wear on the roads and the need to widen any of our highways.

Automakers are, historically, opposed to mass transit. And the Big Three own Detroit, for as long as the Big Three last anyway. They will do what they can to prevent any development of mass transit in Michigan or anywhere else for that matter; GM destroyed the US streetcar system in the 20's, and they never looked back (link).

Our esteemd ex-governor John Engler bears some of the responsibility for Detroit’s problems as well; his last act as governor was to quietly veto a bill that would help create mass transit in Detroit. He literally did it as he was walking out of his office on New Year’s Eve, and it is largely viewed as a vindictive act toward real or imagined slights from Detroit politicians. That was at the end of 2002, and the bill has yet to be revived (link).

I am so jealous of my friends elsewhere who get to take a train to work. Just to have that time to nap or read, and my commute wouldn’t feel like time stolen from my day. I would love to live in a place where I could walk or ride my bike to work; urban sprawl prevents that. Instead, I live in the 10th-worst rush hour in the country, where drivers waste an average of 57 hours each year just sitting in traffic, like I do on the M-10.

I have a quarter tank of gas, which would get me home from work in non-rush hour traffic. Hell, it would get me home and back again, and home one more time. Because of the current state of my drive, though, I need to get gas so I know I’ll make it home. This pisses me off, too; it not only wastes gas (clogged roads cause the average Michigan motorist $318 a year in wasted fuel), but gas by my house is 2.49/gallon, while out here it’s 2.65.

I also hate the fact that individual drivers have the ability to ruin my day. Just because you can’t drive, or you were on your phone, or you decided that you had to drive like an ass and get two car lengths up, you caused a fender bender, and now I am stuck here because of you.

Many times it’s the same makes of cars involved, which leads to a conundrum; do certain people drive certain makes of cars because they are jackasses, or does owning these cars cause you to become a jackass? If you own a Lexus, please let me know your take on your driving personality.

The people I feel worst for, though, are the guys in the traffic choppers. Imagine this scenario: you’re in a helicopter, you’re flying, you can go anywhere, but your job is to sit, if not in, over the traffic, and watch it. Just like the rest of us poor schlubs. You could get away, but you’re not allowed to. You’re stuck in traffic because we are.

Thanks for letting me get that off my chest. Mahalo.
Posted by alpharat at 10:12 AM

The weird thing is that you used the exact same pic I used in a previous post - http://jamoker.blogspot.com/2005/10/rfid-like-to-see.html

Helpful hint: do not relocate to Traverse City in order to escape traffic. I doesn't work. During Cherry Festival I long for I-696 rush hour, mattresses, refrigerators and all.

Be thankful your commute on the Lodge goes by at such slow speeds, lest your hubcaps suffer the same fate.

I realize my across-the-hall commute makes my any attempt at joking into me just being a jerk.

I remember talking to a business collegue from Ohio and her telling me that it was a well known fact that you would need to get your car aligned if you had traveled to Michigan.

I take the infamous "8 Mile" to and from work and although traffic is not normally too bad, the road is horrible. In fact, I have a leaky tire right now that needs fixing.

As a former resident of the Detroit area and commuter to the downtown wasteland...all I can add is that I don't miss the daily drive down the Lodge. The city and state is in the business of making cars. Of course their roads are going to be in bad shape...planned maintenance through wear/tear.