Gorilla with a Knife 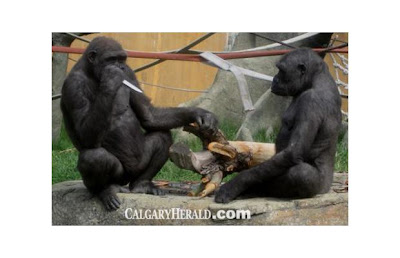 Seriously, the photo says it all. But if you want the story, too, it's here.

Surprisingly, though, this isn't the first incident of its kind. This article about the 25 worst exotic pet attacks includes this item:

June 1995, Hollidaysburg, Pennsylvania: An escaped pet monkey wielding a knife and cigarette lighter enters a standoff with police. The animal was eventually captured.

Man, what I wouldn't have done to have seen that standoff.

Monkeys. Man. Unreliable and dangerous in the most awesome way.

see more Lolcats and funny pictures
Posted by alpharat at 11:29 AM 1 comment:

Question 1: Does anybody read this thing anymore?

If you do, please comment below this post, anonymously is fine, so I can take a tally. I am evaluating my online presence, and something's got to give. It may be this site, you know, unless people do still come here.

Question 2: WTF is up with PETA?

I've been to Seattle twice now, and one of my favorite places is Pike Street Market. They have tons of wonderful food, and it choice for people watching, too.

And they also have these guys:

These are the guys at Pike Street Fish Market. It's one of the best places to get fish in the city, because it's by the water and very fresh, and it comes with a show. Last time we went, we brought back a ton of salmon on the plane, packed in dry ice. We ate it when we got home.

Now it seems that PETA wants to make these guys stop throwing the fish, because it's "disrespectful to creatures that already have gone through a lot," and that "tourists would not be nearly so eager to snap photos if dead kittens or gutted lambs were sailing over their heads."

Now, I'm a big advocate of animal rights. I own two rescued animals. There is just a line between being humane, and being a psychotic zealot. These are dead fish. They were killed to be food, they are not trophys and they're not going to waste, they are on their way to somebody's table. Does it really matter if they fly part of the way? It's like saying that I better not flip those burgers too energetically on the grill, as it's disrespecting the cow that made them.

This is why people think you're psychotic, PETA.
Posted by alpharat at 8:54 AM 7 comments:

Today’s musical interlude: “Leeds United” by (who else?) Amanda Palmer

I really should change the title of the blog from Kit Burns Was Framed! to the Amanda Palmer Superfan or something, but you know, she’s great.

For the past couple days, I have been blasting this song as I fly down the freeway on my way to work.

Of course, today I didn’t fly down the freeway. I crawled, Apparently an armored car spilled its contents on the freeway this morning, and things were shut down while they cleaned up the cash. The people who were there right when it happened snatched up cash and got on their way. Economic stimulus package? We’ll see. If armored cars started spilling cash at random for average folks, it would probably be a lot more effective at spurring consumer spending than all of the cash that was thrown at the banks just to pay disappear into the pockets of overpaid executives.

From the Mind Your Own Business Dept.

There has been a story in the news lately about a pole dancing studio in Orion Township. It’s a fitness class where the instructor teaches women pole dancing for fitness. The instructor ascribes losing 40 pounds to the high level of fitness involved. I can believe it; at a Jane’s Addiction show about 10 years ago, the band had pole dancers on 50-foot poles on stage. The women climbed to the top, hung upside down, let got, dropped 10 feet and then caught themselves with just their legs. These were serious athletes, like acrobats.

Apparently, some residents have their panties in a bunch over the school, like it’s a stripper factory. It’s not, it’s a place where women go to try a new type of fitness. It’s not done naked, and even if it were, who cares, because it’s done indoors?

At any rate, the only criticism that people have about the place is simply to say “it’s immoral.” How unsatisfying are these people’s lives? Talk about repression to the point of danger. Even if your average housewife takes the class, feels good about her self-image, gets self-confidence, and then decides to try some of those class techniques in the privacy of her own home, what is the problem? Seriously, some people need to stop fun-governing.

Let's Win It at Home

The Wings play game 7 tomorrow. It’s all or nothing at this point, and we really need to send the Pens packing like we did last year. The whole town, like most years, has Wings fever. What the Wings need is a little intimidation factor, like the All Blacks have with the Haka.

How intimidated would you be to face off to a team that greeted you with a war dance?

What do we have? Cross dressers. On my way to work this morning I saw a transvestite walking down the street, wearing nothing but a McCarty jersey and high heels (the jersey was long enough to cover up, but barely).

God, I love Detroit, but I wonder how McCarty would feel about this?
Posted by alpharat at 7:10 AM 1 comment:

Music for the moment: A song by Jane’s Addiction.

As per my usual style, I was going to post a video by Jane’s Addiction here, but Warner Music has decided that music videos on YouTube somehow hurt album sales, so instead of a video or musical snippet by the Best. Band. Ever. I am simply going to give a shout out:

It probably helps to say it as much as pulling YouTube videos helps them sell records, but it does make me feel a little better.

Once again, life is moving faster than I can keep up with. Chrysler is down, but it looks like it’s coming back just fine. GM has gone down, and ‘m not as certain about that one. The president is telling our industry how to run itself, and as big of a liberal as I am, I’m not really very happy with him either.

In addition to all of that mess, it seems that I “get to” take a week off this summer. Unpaid, of course. While I’m not entirely happy about that situation, I can say that at least I have a job, which is becoming rarer and rarer in these parts.

Isn’t it sad when “at least I have a job” is the bright side?

Last night, as I was watching the Wings lose (that’s OK boys, we’ll win it at home), I was let in on a secret conspiracy theory. A friend who will remain nameless for the sake of safety revealed his suspicion that the government is trying to drive our entire state into the ground, so that they can close it, use it for a landfill and parcel out the contents of the Great Lakes to the rest of the country, who would love to get their greasy little mits on our water. Who knows? He may be right.

Which would be a shame, because I like this state.

Our little cottage was awesome, like a little fairytale cabin in the woods, if fairytale cabins had satellite TV and modern appliances, that is. We had a relaxing weekend, with some biking, some wineries and brunch with Mr. and Mrs. Z, who are two of my most favorite people in the universe.

Also, we saw the NIN|JA show (Nine Inch Nails and Jane’s Addiction). Nine Inch Nails, who for years have been a great live show actually are quite sucky live now. There are a million different reasons I could go into about this (Trent is old, the last few albums by NIN have sucked, Trent doesn’t put any energy into his performances anymore, Trent has kind of become a whiny bitch onstage), but I won’t get into them.

Instead I’ll simply say that Jane’s Addiction is and always will be the Best. Band. Ever. TFN and I love this band to the point of succumbing to a PDA during “Summertime Rolls.” I think I would have put this wonderful song in the post, but instead I’ll say FUCK YOU WARNER MUSIC!

I really don’t have much more to say about this right now. But, as you all know, I can’t stop talking about music, I will talk about my love for Brody Dalle.

Brody Dalle with the Distillers, several years ago:

She was just such a gutsy, in-your-face kind of vocalist, pure bad-assedness. Her voice was unapologetically harsh, and I loved this band for that. She showed that girls could front punk bands and not be forced to be cute about it.

Then, the Distillers went “on hiatus” for several years.

I eventually figured they wouldn’t get back together.

It turns out I was right.

But Brody would be back.

Over the years, she has had a baby and refined her look and sound. Her new band, Spinnerette, is much more slick, much less badass, but I think sexier, and I still really dig it.

I got to interview Brody. She rocks.

On an unrelated note, did you know they make lingerie out of dairy products in Italy? I saw them at the grocery store.

Honestly, I could rant and rave for a lot longer, but let’s just leave it with cheese-flavored undergarments for now. It seems like an upbeat place to stop.
Posted by alpharat at 10:32 AM No comments: