I'm not judging by any means. I'm just saying I'm not surprised. I think I'd be more surprised if he was the only one...

The details are quite interesting, actually. He's dating Reichen Lehmkuhl, the guy who won season four of CBS' "Amazing Race."

Even more odd is that he and Joey Fatone are developing a sitcom pilot inspired by the "The Odd Couple." Bass is going to play a gay character.

It's almost like he waited to come out until it would help his career. Like he was holding onto that bit of trivia until he was ready to relaunch himself into the public eye. It wouldn't surprise me if the same people who manufactured 'N Sync are still handling his career, telling him when it was a good move to come out.
Posted by alpharat at 1:04 PM 8 comments:

Photos of Team Angry Monkey at the Tree Farm Relay


Sitting at the starting line, waiting for the relay exchange. Check out my wicked wheelie!

Nicole and I hanging out at base camp. Note the red plastic cups. For those who are unfamiliar, this is the universal sign of public alcohol consumption. This also means the photo was taken after the race.

(Almost) the entire crew. This was taken before the race, and Paula, our starter couldn't sit still to pose for a photo, as she was raring to go. This is because Paula is hardcore, and she does 100-mile races. We are not as hardcore as Paula.

The next two photos were taken by an on-site photographer:

This is my relay team on the "winner's podium". Chelsea the dog was an honorary member. That's Paula in the front. We finally got her to sit still. This is after she rode her bike an hour to the race, raced, rode an hour home, showered and changed, and came back for a beer. It's not easy to get her to sit still.

This is Adam of Team Angry Monkey crossing the finish line with the Jolly Roger, which had been discretely handed to him at the beginning of the finish chute.

Proof of the win (AKA the booty).

Assault With A Deadly Veggie 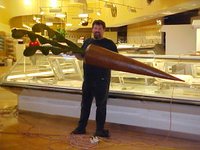 Long story short: this married couple in Connecticut were arguing.

What were they arguing about? Who knows. Maybe it was about money, maybe one of them dented the car, maybe he just forgot to take out the trash. It doesn't really matter what the argument was about.

The thing is, the husband got mad, so he chucked a carrot at her.

It poked her eye out.

Now he's being charged with second-degree assault and disorderly conduct.

I can't help but think that something went horribly wrong here.

What if they were simply having a little spat about something really inconsequential, and he simply was very frustrated and he lashed out?

It's never right to throw something at someone; our parents stressed as much to us, usually with the threat that one could poke someone else's eye out. Still, I can't imagine this guy meant to seriously injure his wife.

If he had, he'd have chosen something large, or heavy, or with a more dangerous point than a carrot. He'd have thrown a brick, or a tire from a 1976 Volkswagen, or maybe a Rottweiler.

Still, the damage is done; she lost an eye, he's facing charges, their marriage is probably over.

Think about that the next time you're in an argument with someone you love. Is it really worth the satisfaction you'll get from throwing some small inconsequential item if it could lead to permanent physical damage? Or even just irreparable hurt feelings?

This was by the water, too. The city was even hotter.
Posted by alpharat at 11:00 AM 2 comments:

I wonder what they think of the Grand Canyon?

Some people have too much time on their hands... And I'm not just referring to myself here...

I'm heading out to Seattle in two weeks, for the wedding of an old college friend. We're taking a few days off to make a vacation out of it, too.

I'm looking up some cool places to take off to for day trips, to do a little hiking in the mountains. This lead me to read about Mt. Rainier National Park on the AOL City Guides, which, in turn, lead me to read user reviews. I like reading them, because you can occasionally get helpful hints about places from them, and sometimes I like to just read bitchy comments by people that I can tell I would immediately hate if I met them.

This comment on Mt. Rainier, is most awesome, though:

The most wonderful place on earth is not a volcano that is set to go off in the future while ignorant people worship the monstrous thing. The most wonderful place on earth is YERUSHALEIM the place where the blood for the atonement for the sins of the world was shed. Give your life to the LORD YESUS CHRIST WHOM CAME ON THE FLESH AND WHOM GAVE HIS LIFE IN ORDER THAT YOU MAY HAVE LIFE ABUNDANTLY AND WHOM IS AT THE RIGHT HAND OF THE MAJESTY IN HEAVEN AND WHOM WILL ROLL UP THE HEAVENS LIKE A CURTAIN. IT WILL BE FROM YERUSHALEIM WHERE HE WILL REIGN AFTER HIS RETURN TO EARTH TO DESTROY THE ANTICHRIST SYSTEM AND IT'S FUTURE MONSTER RULER WHOM WILL SET THE MARK OF THE BEAST SO THAT NO ONE CAN BUY OR SELL UNLESS THEY HAVE THE MARK OF THE BEAST OR THE NUMBER OF HIS NAME WHICH IS 666. IT WILL NOT BE FROM MT RAINIER NOR MOSCOW NOR WA DC NOR ROME NOR EUROPE WHERE THE MESSIAH WILL REIGN BUT IT WILL BE FROM YERUSHALEIM- REPENT FROM YOUR SIN AND RENEW YOUR MIND WITH THE WORD OF THE
CREATOR.

OK, WTF? What prompts someone to put a semi-literate religious rant on a tourism site? And who gave these people Internet access in the first place?

Watching this person type this out would have been probably amazing, as they got swept up in a religious fervor and decided that NOW WAS THE TIME TO SLAP THE CAPS LOCK DOWN AND PUNCTUATION BE DAMNED. I wonder if they walk around with the smug satisfaction that they really accomplished something today?

And does anyone have any good recommendations for day trips out of Seattle that don't require that I repent from my sin and renew my mind with the word of the creator?
Posted by alpharat at 9:17 AM 3 comments:

Please tell me the piano has been drinking, not me...

The piano has been drinking,
my necktie is asleep,
and the combo went back to New York,
the jukebox has to take a leak.

So Tom Waits is coming to Detroit next month.

Said roar, roar, the thunder and the roar
Son of a bitch is never coming back here no more
The moon in the window and a bird on the pole
We can always find a millionaire to shovel all the coal.

Tom fucking Waits! This is a guy who doesn't tour. He hasn't been here in something like 20 years.

The tickets went on sale today at 10 am.

I will leave behind all of my clothes I wore when i was with you,
all I need's my railroad boots and my leather jacket,
as i say goodbye to Ruby's arms, although my heart is breaking,
i will steal away out through your blinds, for soon you will be waking.

I logged onto Ticketmaster, and got a pair of balcony tickets. So I called Nicole and told her. She said, "buy them," and rightly so.

I tried to buy them, and Ticketmaster crashed.

So give it up and throw me down a couple of quid.
Everybody wants to see The Eyeball Kid.

So I tried again. They were sold out.

Tain't the mince meat filagree
And it ain't the turkey neck stew
And it ain't them bruleed okra seeds,
though she made them especially for you
Worse won a prize for her bottom black pie,
the beans got to thrown to the dogs
Jaheseus Christ I can always make room when they're cookin' up a Filipino Box Spring Hog.

I tried again, just in case. I'd already told Nicole we had them, how could I tell her that I lost these tickets to a chance-in-a-lifetime show?

When I tried again, I got eighth row. Right down in front.

The world is not my home,
I'm just a passin thru.
Come on up to the house.

Jesus. I'll be able to see the sweat on his whiskey glass.

I hope that everyone had a pleasant Fourth. I did, for the most part.

The weekend kicked off with the wedding reception of Mike and Paprika.

There was food, drink, live music...

...and hula hoops. This is the bride and groom in action (That's Wally Pleasant on the guitar).

He was followed up by Scotty Karate, shown here with one of his biggest fans.

After the reception we went to my parent's cottage on the other side of the state. We played with the nieces...

and had a great time, until...

Baby No Name ate his grandmother!

We were powerless to stop him! Oh, the humanity.

This is why you never turn your back on a baby.