Night of the ZOMBIE WORMS! 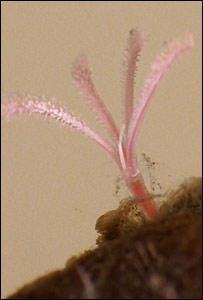 The director’s cut of George Romero’s Land of the Dead came out on DVD yesterday. I of course picked up my copy of what I feel is one of the best movies released this year. In honor of the DVD release, I have a “zombie-related” item from the news this morning.

A UK-Swedish team of scientists has reported the discovery of a new species of marine worm off the coast of Sweden. The worms are called “zombie worms” because their diet consists of the bones of dead whales. After a whale dies, and his bones drift to the ocean floor, these “zombie worms” are part of the cleanup crew.

I think the coolest part of this new discovery, though, is the name they’ve given this new species. From the article:

I am totally going to have to remember that one. It almost sounds like a classical Roman insult; “Pipe down, you bone-eating snot-flower!” Man, the possibilities are endless!
Link
Posted by alpharat at 6:54 AM