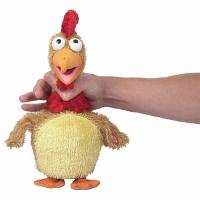 An Australian animal rights group is speaking out against a toy chicken that squawks and flails about when you choke it.

From the Jaycar Electronics Web site, where they advertise the toy:

Grab him by the neck and he will squawk and cluck like mad, flapping his wings and feet wildly as if he is really being choked.

From a statement by Michael Beatty, of the Royal Society for the Prevention of Cruelty to Animals:

What's next? Burn a cat? Shoot a dog?

Regardless of how you feel about the ethics of manhandling a toy animal, it appears that everyone involved is ignoring the best part of the story; it’s a kid’s toy called The Choke-A-Chicken! Is everyone just being too polite to mention that, or does that slang just not carry to Australia?

Link to The Choke-A-Chicken site
Link to news story
Posted by alpharat at 12:44 PM

Interesting. Aussies do choke the chicken, but not while they're visiting Mrs. Palm and her five daughters.

And you thought dating Miss Michigan was fun!

I've never met an Aussie too polite to use naughty slang. Seriously.

since no kid will ever be inspired to actually go choke a live chicken after playing with the toy, I find the attitude of the animals rights group to be completely ludicrous. they should protest the treatment of real chickens instead, like PETA does to KFC. maybe a kids rights activist group should protest what is a simply a bad toy.

is The Jamoker a choker?

These guys have it all wrong. Choking the chicken is fine, as long as you're not driving.