Elmo Will Pay for His Crimes 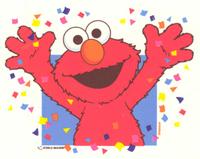 In a crackdown on what they called "aggressive begging”, the LAPD arrested three men dressed as Elmo, Mr. Incredible and the hooded villain from the movie Scream.

The trio was arrested for allegedly harassing tourists on Hollywood Boulevard for money to pose for photos with the costumed impersonators.

"We were leaving to get something to eat," Mr Stockton told the Los Angeles Times. "We had our heads off and were walking about a block away to our car when they pulled up."
"They jumped out of their cars with guns drawn," said Mr Harper, who says he makes up to $400 a day in tips.
They claim they were handcuffed and taken by police car to the Hollywood Walk of Fame where they were then paraded in front of shocked tourists and other impersonators.

They were eventually released on a $100 bond. Am I the only one who entertained the daydream that the guy in the Elmo costume was a dangerous felon who yelled, “you’ll never take me alive, coppers”; then attempted to pull a tommy gun from his suit and then went down in a hail of bullets in front of everyone, and that “Elmo Gunned Down by Police” appeared on the front page of newspapers nationwide the next day? Seriously, is it just me?
Link
Posted by alpharat at 8:37 AM

If they had their heads off, how could they have been impersonating? Elmo is no Elmo if he's not wearing his head. And what about the Scream guy? Without his head, he's just a guy with eery black clothes on. Hmmm, I guess in some states that might be enough to send someone away.