It's all about the Font Rock... aka trying to make good on my promise to Magazine Man.

I received a package on Tuesday from Magazine Man containing the new digital camera I won in his “Giveaway of Crap”. It’s amazing! In return, I promised to use it for good, to promote my fair city of Detroit, and generate all of the positive buzz that I can about our fair city’s art, music and culture.

With this intention in mind, I allowed myself to be dragged down to Club Bart last night for a Helvetica show. By saying I was dragged there, I am not implying that I didn’t want to go; I am saying that I was suffering from the most debilitating cold I’ve encountered in a while. My head felt like my sinuses had been packed with sand, and yet the sand was porous enough to allow a constant drip of fluid out of my nose and down my throat. Blowing my nose was useless; it just filled back up again.

With that lovely picture of my failing health in mind, I was unable to do much more than prop myself up at table with a cold pint of Labatt Blue in front of me (it may be placebo but beer made me feel better). This explains the low-quality, uninspired nature of the photographs. I was able to get one good photo of vocalist Eric Livingston when he stopped to chat at our table before taking the stage. 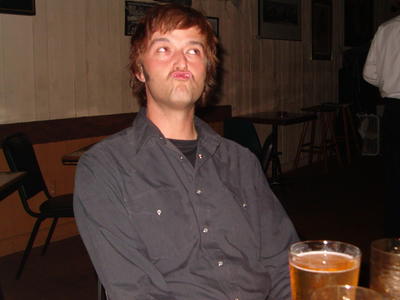 Club Bart has an interesting setup, to say the least. The stage is actually up behind the bar. And it’s a small stage; standup comics look good up there, but bands are crammed in, the members seemingly piled right on top of one another. It looks a bit awkward, but they do it. I just hope I’m never in a band booked to play there, as I would be sorely tempted to grab liquor from the shelves in the front of the stage! 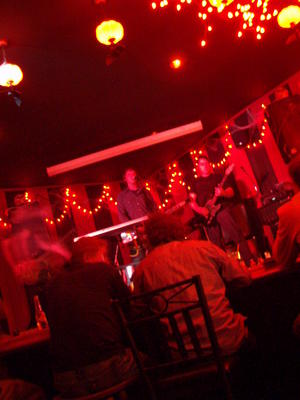 Helvetica has a great sound. What they themselves describe as feedback-driven indie-pop doesn’t really do justice to the sound that describes shades of Love and Rockets, Radiohead (sans Thom Yorke’s hideously whiny voice), The Church and a liberal dose of shoegazing. There is a definite wall of sound projecting from the stage, washing over the crowd in waves of soothing noise.

Unfortunately, the sound at Club Bart is not ideal for this, and I was very aware of the fact that I was missing a lot of the intricacies in their songs; it was like seeing a velvet curtain in light too dim to make out all of the embroidered detail. I can’t wait to see them again in a space with a better sound system and cleaner acoustics.

The headlining band was Lisboa, and they seemed to have a decent sound, but at that point I was succumbing to the effects of my illness and had to go home and to sleep. Sorry guys, I can give you a better listen when I’m feeling better.

Local readers will want to check out Helvetica at the Painted Lady in Hamtown on November 4th. I will not be in attendance however, as that is the weekend that my fellow members of Team Angry Monkey and I will be staging our polar assault on Traverse City in the Iceman.

So there you have it: my first pro-Detroit post in the era of the new camera. I apologize for the low-quality MM, and I promise to do better next time, provided my diseased body allows.
Posted by alpharat at 11:33 AM

Never seen the band, but I've been to Club Bart (though if memory serves, believe mostly for brunch) a few times when I'm back visiting my family/friends in the RO and Fashionable Ferndale :-) and I can see what you mean about the set-up. Keep up the Detroit promotion - good stuff.

Awright! Glad it's getting some use. And no worries about quality: I'm the worst photog on the planet.