Of course the Redwings rule, science said so. 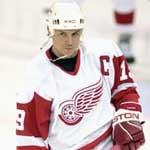 In keeping with today’s theme, I would like to refer everyone to findings released this summer that show another reason the Redwings rule. According to a study carried out by British anthropologists, findings show that when opponents are evenly matched, the team or athlete wearing red is more likely to win.

The fact that they're British and don't even watch hockey allows us to accept these findings as unbiased; and while this study should in no way be interpreted as suggesting that the Wings would ever be lowered to the status of being an even match to anyone, it does serve to put one more advantage on their bench.

Red seems to be the color, across species, that signals male dominance and testosterone levels.

It is an iteresting thory; but then again, when the Wings beat St. Louis tonight, you should probably realize that it’s because of the fact that Keith Tkachuk is a punk, and really has little to do with red uniforms. Link
Posted by alpharat at 12:02 PM

That survey was done a few years ago, when Arsenal, Liverpool and Manchester United, who all play predominantly in red, were dominating the English Football [soccer] Premiership. I'd be interested to see how their findings work out now that Chelsea, who play in blue, are winning everything in sight.

Also, if having red in your uniform means you have more chance of winning, how come the Minnesota Twins aren't in the World Series more often?

As far as the Twins go, I'll go out on a limb and say baseball doesn't apply to this, because baseball is boring, so the winning team will always be the team with the best attention span.