Roadworn and weary, I've gone one too many miles... 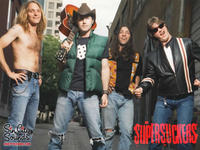 So I know I should be getting ready to hit the road for Kalamazoo, as I m just getting up at the time we were planning on hitting the road, but I've got a few minutes while the coffee brews to give a brief recap of last night.

THE SUPERSUCKERS ROCKED! But, I'm getting ahead of myself.

It was the Mydols, the Grande Nationals and the Supersuckers. We missed the Mydols, and got there halfway through the Grande Nationals set. They were amazing! As we walked in the door to the Bag, while I was waiting while the doorguy went through his stack of guest lists to find our name (thanks, Andy!), I heard them say they were going to play "Cold Water", which is my favorite Grande Nationals tune, by virtue of the fact that Julie always plays it in Punk Fitness. So I was stoked about getting there to see it performed.

The Grande Nationals are local, and by local I mean Ferndale local, not even just Detroit local. They have a great power pop rock sound without being garagey (and there is a plethora of Detroit garage right now; this is refreshing). Stevie, the singer has a stage prescence a lot like David Johanson. We saw the New York Dolls a few months ago, and that ranks up there with one of the best rock shows I've seen. Grande Nationals were similar on stage.

The Supersuckers came out, opened with a rocked-up version of "Roadworn and Weary", closed with a long version of "Born with a Tail", in which Eddie Spaghetti passed his bass around the band for everyone to knock out a bass solo, even the drummer who played it with his sticks and it sounded great. Mixed in to the set they had a few of my other favorites, like "Supersucker Driveby Blues", and they played some new stuff which, as Eddie said "is the greatest rock ever, because that's what we do."

And Eddie signed my 7" cover for "Born with a Tail", and gave me some old-school props for having it (I bought it in 93 or 94), and it was pretty cool to meet him and talk for a second.

Anyway, you've now seen what it looks like when I hammer out an entry in 10 minutes, before I've had any coffee. Gotta go, gotta hit the road.

I'll chat when I get back.

Mahalo.
Posted by alpharat at 6:51 AM