In Which I Party Like A Rockstar (a.k.a. The Very Paybacks Weekend) 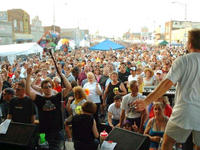 Author's Note: This is one of those diary-style blog entries. If you don't like them, skip this one.

Labor Day Weekend is a great time to be in Detroit, as it seems like there is something fun to be found anywhere you look. This year we hit Pontiac’s Arts, Beats and Eats on Friday and the Hamtramck Labor Day Festival on Saturday.

Arts, Beats and Eats is your typical street festival, with booths selling tickets that you redeem for overpriced beer and miniscule portions of food from local restaurants. The music is what makes it great, though, and while people cram their bodies up to the main stage to catch free performances from “heavy hitters” such as Seether, Eddie Money and Rick Springfield, we made our way to the side stages for performances from local artists the Twistin’ Tarantulas and the Paybacks.

The Paybacks are a solid presence on the Detroit scene and arguably one of the best rock bands to come out of the Motor City in a long time. They were performing as a three-piece; guitarist Danny Metric was unable to play out due to illness. Even as a three-piece, they played a solid set, with front-woman Wendy Case filling in the riffs quite well.

Hamtramck’s Labor Day Festival is a much more raucous decadent counterpart to Pontiac’s festival. First of all, there are no food or drink tickets. Want some food? Walk up to the booth and buy it; the same goes for drinks. This eliminates the feeling that you’ve wasted your money when you’re going home with one or two extra tickets that you couldn’t redeem, because nothing is available for only one or two tickets.

The food is authentic, too. While I was there, I loaded up on a plate of pierogies and a kielbasa loaded down with sauerkraut, all prepared by local Polish eateries.

And the entertainment? In addition to a wrestling ring in the middles of the street featuring live independent professional wrestling, there were a great many local bands playing on the stages. Once again, we saw the Paybacks. They were playing as a three-piece once again, and Danny Metric also had to cancel a performance earlier in the day by his side-project, the Muggs.

Former Detroit Redwing Darren McCarty’s band Grinder was also there, following up a main-stage performance in Pontiac the night before. It was a bit of a farewell party for him, as he’s been traded to Calgary. His band was well-received, but I am embarrassed to admit that prior to his performance I stood right next to him and merely wondered who the guy with the Mohawk was. Of course, I had been at the festival for six or seven hours at that point, and had visited several bars and beer stands by then, so we’ll forgive me.

McCarty was not the only celebrity in effect that night. Following the festival, the SSM show at the Belmont was wall-to-wall people, some of them famous. Attendees included Meg White, Brendan Benson, esQuire, and members of the Von Bondies and HafLife. I was, at that point, too partied out for all of the festivities going on around me, but I was definitely able to sit at my table and reflect on how cool it is to be in a town with such a vibrant music scene. And buck-fifty cans of PBR.

The weekend was wrapped up with a trail ride at Bald Mountain, where I sweated the toxins out of my body before putting them back in at a very relaxed backyard bonfire. For those of you in attendance, thanks. It was a nice night.

Another thought on NOLA

One weekend, two crowded street festivals. Even as I had a wonderful time, I thought several times about New Orleans, and it seemed to be the first topic on everyone's minds. Even as I complained about the cost of the beer stand, I thought about another city where the streets are filled with people but there are no beer stands, and no rock bands; and not even any clean water. One more reason to feel fortunate for my safety and comfort, as well as for, as my friend puts it, "at least we got to see that city once while it was standing."

So everyone in the South is still in my thoughts and prayers, and for my local friends who read this, HafLife is playing the Whitney Garden Party on Thursday, and they are donating their proceeds from merchandise sales to the Red Cross. It's a great band, and a better reason to check them out.
Posted by alpharat at 12:48 PM