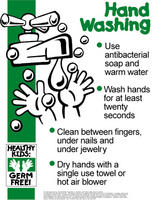 For my first post-liberation potty post, I wanted to point out this story about the latest amazing findings by Scientists from the American Society of Microbiology.

Apparently, women are more likely to wash their hands after using the facility. Women in general have better hygiene than man.

This to me is one of those studies that somebody convinced somebody else to fund in order to justify paying some other people's salaries.

Everybody knows most women are cleaner than most men.

Other groundbreaking finds from the study include noting that people at an Atlanta Braves game are less likely to wash their hands than people at Chicago's Museum of Science and Industry and Shedd Aquarium.

OK, first, if you've ever been to a ballgame, you don't want to touch anything in those bathrooms.

Second, they are ignoring the fact that most everyone at the ballgame is intoxicated on some level. I think I'm the only one who goes to the museum drunk.

And the creepiest part about it all is that the study was conducted by spying on people in public restrooms.

See, that guy wasn't a pervert. He was a scientist.
Posted by alpharat at 8:30 AM