Dueling Banjos Would Go Well with This Story... 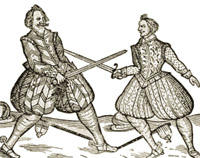 It seems like we have a lot of news stories coming out of the Metro Detroit area that just reinforce my opinions that we, as a race, just keep getting dumber. This is another one.

Apparently, this guy from down in the Clem (that’s Mt. Clemens for my non-local visitors) was admitted to the hospital with stab wounds. It turns out, he got them from dueling. With his cousin. Over thirty bucks.

In the incident, the two men who reside in the same home on Walnut Street with other relatives disagreed over a $30 debt. Wielding a knife, the older cousin confronted the younger cousin, who retrieved a knife and accepted the challenge, the sheriff said.

"He could've done any number of things," Hackel said. "He could've called police, he could've fled the area. But he took on the challenge and became part of the problem."

The guy who got stabbed is only 19. The challenger was 31. Both are way old enough to know better. I think I knew that you weren’t supposed to challenge family members to games that ended with one of you dead by the time I was 9.

I also like the brief mention that they live in the same home, with other family members. I get this immediate image of the Hatfield family compound, but in the city. Dogs under the porch, Ma hanging up the washin’, Pa brewin’ hooch out in the shed, you know, real all-Americans.

Dueling is not something you think of as a possibility in this day and age. You picture it as more of a French Aristocrat defending an insult to his name or something. Apparently these two guys have a stronger sense of honor than one would realize at first.

Another interesting factoid in the article – it’s apparently illegal to even challenge anyone to a duel. It’s a felony. I gotta remember that. It’s only through pure luck I haven’t gotten busted for challenging my friends to pistols at dawn over whose turn it is to buy the next round. Link
Posted by alpharat at 1:27 PM