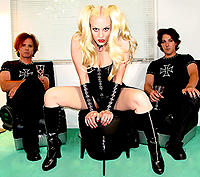 GirlPunk has a great interview with Karen Neal, lead singer of the Detroit band Queen Bee. Karen goes to the same Punk Fitness class that I do, and she is a real sweetheart, as well as being part of one of the best bands in the Motor City.

There is a whole section in the interview where she talks about Punk Fitness Detroit! While this piece doesn't mention me by name, I think it paints a much better picture of the class than the article I referred to previously.

I got to admit you have an awesome figure so you're into working out or does that come naturally? What involvement do you have with the Punk Fitness Programme in Detroit?

Why, thank you! Quite honestly, I have never been to a gym, nor a fitness class until I heard about Punk Fitness! I've been through extensive physical therapy due to several disc herniations in my lower and cervical spine and really felt I needed a change of lifestyle. After attending one class, I was hooked! Julie Hecker has been teaching fitness for over 20 years. She is a total scenester and supporter of Detroit bands! The classes take place in different bars before the patrons show up and the people that attend get to pick the songs we work out to! There's nothing more exhilarating than jumping around to DK's "Nazi Punks Fuck Off" or doing sit-ups to Peaches "Fuck the Pain Away"! It's sometimes weird hearing your own shit played, but flattering when you find out that someone else requested it! Everyone is either an artist, musician, writer, performer or freak of some sort. It brings the Detroit scene closer and makes you want to work harder hearing your favorite music! I am a much happier person today than I've been in a while, now that I am getting exercise and meeting new friends! Julie works us hard, then stays for a beer and hangs! I actually started a hula-hoop trend within the class! I cannot say enough good things about Punk Fitness because we all need it! This idea is pure genius and I'm gonna do all I can to help promote it! I want to be the picture of Punk Rock health!

By the way, even if this one doesn't mention me by name, I like to think she's thinking of me when she refers to either the writers or the freaks in the class. I'll take either as a compliment. Link
Posted by alpharat at 8:14 AM

AWWWE!!! I am touched by this!
It makes me a happier person knowing that my efforts to help Punk Fitness Detroit are being recognised by others...as well as my other artistic endeavors! Thank you, Sweetie! You Rawk!
See ya in class!