Batman begins, and an era ends... 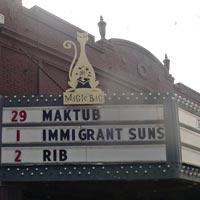 I finally saw Batman Begins last night, at a Brew and View at the Magic Bag. Without going into much detail, because it would just turn into a half-assed review, I have to say that I think it’s the best Batman movie yet. It was even better than the 1960’s Batman!

This is saying a lot, because I am both a huge Batman fan and a Tim Burton fan. This one was the best so far, though. Not even that rubber-faced prat, Katie Holmes was able to wreck it. Granted, it seems that they tried to give her minimal lines, but whenever she opened her mouth, it was painful. As my wife pointed out though, it didn’t really matter, as Bruce Wayne’s love interest is always a weak, pointless character in these films. She’s just a device, usually.

I do like seeing movies at the Brew and View. It’s the perfect way to catch many films, sitting at a table with some friends, watching a movie on the big screen while a waitress occasionally swings by with another PBR tallboy (pure class!). It’s not the ideal place for any film; dramas or artsy films would never work here, but something like Batman, or Jackass, which was awesome at the B&V, is perfect to be viewed in a bar.

Tonight we're headed back to the Magic Bag to see the Supersuckers. That should be fun. I haven't seen them in about five years, but they were really good then (that was the night after my wedding). And, tomorrow I am going to Kalamazoo for the night. It's weird. We're going out there because Bilbo's is closing. Bilbo's is a bar from my past. Not only did I work there as a bouncer, bartender, cook and waiter for four years, it's also where I first talked to the girl who would become my wife, and where we went on our first date. It will be sad to see it go, but it hasn't been the same for many years, I've heard.

BATMAN ROCKS! I agree, this was the best Batman movie so far! We saw it at the drive-in. I've never heard of a Brew & View, but it sounds like a lot of fun.
I have to say, it is wonderful that you remember with such fondness the place you and your wife met and first dated.
Thanks for sharing!
Holly
sahmbreakroom.blogspot.com