Paris Recap, Day 4- In which we hit both the low point and the high point of the trip...

Due to the previous night’s adventures, we slept late this morning; not too late, though, and we were out the door and on the Metro by noon. Our first destination for the day was the Paris catacombs.

Paris sits on a rather soft foundation of limestone that was quarried for rock since Roman times. After hundreds of years of mining for rock deep below the city, tunnels started collapsing, and people started to realize that perhaps digging under their houses was not the wisest way to procure building supplies. Mining for rock below the city ceased.

In 1786, certain neighborhoods in Paris were being plagued with disease, caused partly by contamination from cemeteries where bodies had been buried in shallow mass graves. It was decided that the bodies could be thrown in the now vacant tunnels. Under the cover of darkness, members of the church spent over two years digging up 3 million bodies and dumping them in the tunnels.

Over the years, bodies of those killed in the riots would be dumped in the tunnels, as well as casualties from various battles. Over time, the body count in the tunnels would rise to six million. Eventually, in the 19th century, city officials made order of the bones, creating the ossuary that can be visited today.

In a non-touristy neighborhood, the catacombs can be entered through an unassuming door. You pay an attendant €5 and enter a narrow spiral staircase. Like Notre Dame in reverse, you descend a few hundred feet below the street, and end up in an old mine passage.

The passage winds for several thousand feet before you enter an atrium bearing the inscription Arrete, c'este ici l'Empire de la Mort (Stop! You are entering the Empire of Death). This is the entrance to the ossuary.

Simply put, the skeletons have been piled several meters high and several meters deep along the tunnel walls, arranged by the era in which they were placed in the tunnel. It’s deathly silent (no pun intended), the only sound being the rock crunching beneath your feet and the sound of water dripping from the low ceiling.

It was an eerie experience, although very cool. One couldn’t help but wonder who all these people were, what they did, what they were like. It was really an amazing look at… something. Grasping mortality? Realizing that we’re all going to end up in a bone yard somewhere? Maybe, maybe not. Maybe it was just a cool chance to look at some bones.

As you make your way out of the catacombs, you ascend the same number of stairs and are spit out in an alley a few blocks from where you started. The business of the city goes on around you, oblivious to what is right below.

This is the only section of the tunnels open to the public, but unofficially people have been exploring the tunnels for years, even living down there. There are tunnels that were used by both the Nazis and the French Resistance during WWII, and there are all sorts of organizations that have been illegally documenting these tunnels. Here's one.

After leaving one of the least-know tourist attractions in Paris, it seemed right that our next destination was one of the best known…

Built to be the entrance at the 1889 Exposition Universelle, the tower is both an eyesore and an amazing architectural feat. It’s an exercise in symmetry; everywhere you look there is a beautiful intersection of angles, and of course the view from on the tower itself is amazing.

You could definitely get a nice view of football practice from up there... 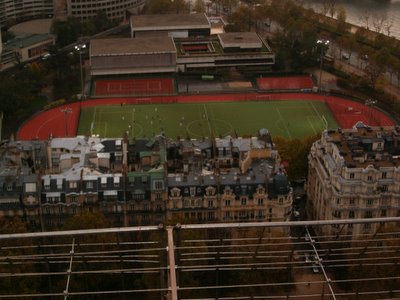 There’s really not much to say about the tower – it is what it is.

Another place that may or may not be an eysore, the Centre Pompidou looks like a Habitrail on the outside.While we were there at night, I swiped this photo for reference. 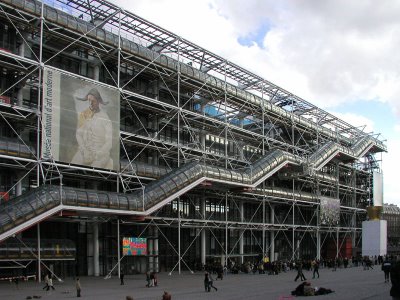 Those hamster tubes on the outside are the tubes which take you to the top, where the collections are housed. We were also treated to a views of the spastic Eiffel Tower lights, and a lit-up Sacre Coeur (which is on tomorrow's itinerary) on the way up.

Currently the art is displayed by theme, rather than chronologically. It’s a really cool way to view the art.

I did yank a few of my favorites to show you, though. 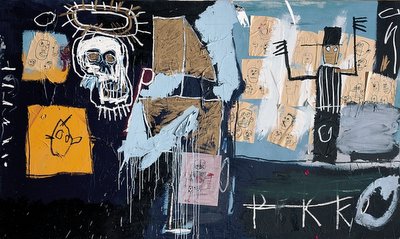 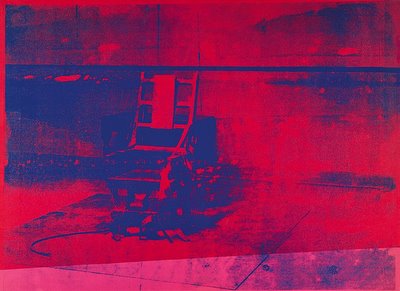 Another crazy cool piece was Grafted Garden, by Tetsumi Kudo. It’s an installation where body parts are being grown in a garden setting. I don’t know if it’s about man’s inhumanity to man or if it’s a statement of personal and political activism, but I do know it’s wicked cool. 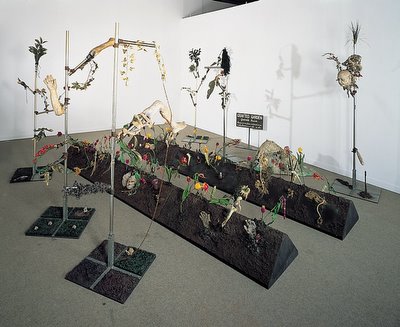 I also wanted to point out one more; this is La Toilette, by Frau vor dem Spiegel. I like it because it looks to me like a similar study to the Toulouse Lautrec piece with the same title we saw a few days prior. 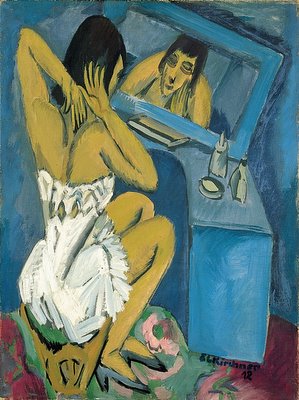 There is a virtual walkthrough of the exhibition here, should you be so interested.

At this point, it was pushing 10, and we were dragging. So we stopped in a brasserie (most restaurants are closed on Sunday evening so our choices were limited; even though Frommer’s said restaurants were closed on Monday and open on Sunday, we found the opposite to be true. Then again, Frommer’s sucks.) for some lamb chops. Nicole also had l’hericot verts, or green beans. Leave it to the French to perfect green beans! They were tasty, buttery, garlicky and quickly consumed.

Then it was back to the hotel for a glass of wine and some well-earned sleep.

I think Ripley's Believe It or Not did a segment on the catacombs, and it creeped me out. I do enjoy spelunking, but I don't know if I could handle the skulls. Did you find yourself guessing age, gender, cause of death? I would start feeling guilty not looking into every face.
Skull face, that is.
*Gonna have to come back to check the modern art link.
When do we see Nicole's pictures? Not that yours aren't cool!

The Catacombs are the best tourist attraction in all of Paris. Bar none. Some of the inscriptions on the walls are beautifully poignant, although this is rather offset by the fact that I kept smacking my head on the ceiling: the walkway's around 5 feet high in places and I'm 6 foot 6.

Did you get frisked as you left them? We did; they're paranoid about people stealing bones as souvenirs.

Paris has its fair share of weird tourist attractions. There is also, if I remember correctly, a tour of the sewerage system quite near the American Church.

And the Pompidou Centre is a beautiful building - I lived opposite it for half a year and never once found it the eyesore that most Parisians seem to think it is. Although the frequent demonstrations ('manifs') on the sqaure in front of it started to annoy me after a while, especially when they start drumming and shouting at 9am on a Sunday.

The look on Nicole's face in the catacombs is priceless! Looks like her tongue has swollen into the back of her throat. "Ahh, can we leave now?"