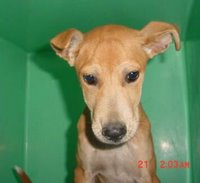 UPDATE: Apparently the animals will not be euthanized, but I don't think this is the end of this. The current statement is that Animal Control will be locking its doors for two weeks, and no animals will go in or out during that time, but existing residents will be fed and watered. There has been no official statement as to what will happen when the doors reopen, or if they will accept any more animals. As it stands, city services are in dire straits, and we'll see what happens.

This latest clarification came from Detroit Health Department Deputy Director Dr.Vincent Nathan, in a conversation with Joe Sowerby, who is chairperson of the Detroit Animal Care and Control Advisory Board.

This is Josie. She's a young Shepard mix currently residing at the Detroit Animal Shelter, but unfortunately not for long.

The City of Detroit is bankrupt, and has been for a while. As a result, they have decided to cut all "non-essential" services. According to the City of Detroit, Animal Control is not essential. They are closing on December 17, and all of the animals are slated for euthanasia.

It's really not fair that the animals are being forced to face the consequences of a city that has been poorly managed for so long, and with no end in sight. So I am asking all of my local readers to do what they can. If you can't adopt (we can't; we have a dog and a cat taking up too much space as it is), at least spread the word to everyone you know.

I received this message today from the people at the Michigan Animal Adoption Network:

All of the Detroit Animal Control (DAC) animals are slated for euthanasia on Dec. 17, unless area rescue groups can pull them. The devastating news came today from DAC employee Patrice Reed. As you may have heard in recent media reports, in an attempt to save money, the city is cutting "non-essential" city services for certain blocks of time. Guess what folks? Animal control in the city is considered a "non-essential" city service. Detroit Animal Control will completely close down for the last two weeks of December, starting Dec. 17. DAC has beautiful cats, dogs, kittens and puppies. If you or anyone you know is in a position to pull animals from the facility, please do so. This is beyond an urgent situation. If you have any questions, please contact me at (248) 545-5055.

Animal Control is non-essential? I wonder what they're going to do with the packs of wild dogs in the neighborhoods now.
Posted by alpharat at 7:20 AM

Thanks for posting this, Ryan. It's a sad, horrible situation. It seems there should've been a contingency plan. But, that's just plain forward thinking, an enigma for City of Detroit employees.

I'm obliged to take back my slam on the Detroit employees (even tho I think that many of them, especially the ones in the Mayor Coleman Young building are completely useless). The DAC has clarified the message, and the animals are not going to be euthanized. The shelter will be closed and the animals will be given food and water.

Why must you tug on the heart strings?! You know I want a dog! Why must you always try to manipulate my emotions?!

...they are cute though.

I linked to this post with a couple of remarks of my own. Very frustrating & sad situation.

But word verification says "cutye" -- amzingly timely and uplifting for a change.