And the snow shall be red with the blood of the unbelievers... ummmm I mean Merry Christmas!

A lot of people go way overboard with their Christmas decorations. Sometimes it's an obnoxious light display that slows traffic. Sometimes people put up massive Nativity Scenes to display their religious convictions, or Santa and some reindeer to express their love of the holiday.

But what does it mean when their display includes Santa on a bloody killing spree?

One couple in New York put up a display in front of their mansion displaying just that. Amidst a scene of carnage, Santa is holding a knife and a bloody severed head.

Regardless of your initial reaction, the couple claims its a form of protest with religious meaning:

Krupnik told the New York Post it was a statement about the commercialization and secularization of Christmas. "Christmas has religious origins,'' he said. "It's in the Bible. Santa is not in the Bible. He's not a religious symbol.''

Not the track I would have taken. If I had a display like this and a reported asked why I did it, my reply would simply be, "because it's really freaking cool."

Link to news story
Link to site with more pics

Turning the tables on Santa 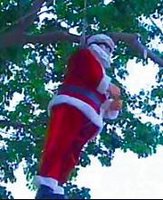 If that wasn't hilarious enough for you, a Florida man decided to lynch Santa. He's not talking about why he did it, but I bet it has something to do with not getting a toy train when he was seven.

Link
Posted by alpharat at 8:26 AM

In picture 5 from the links I thought that tree branch or whatever it is was Santa's wee-wee.

Um...not that I don't encourage the strange & unusual when it comes to Christmas decorations, or any decorations for that matter...but there's no need to make a statement out of it. What kind of lame excuse is that?

Wasn't Christmas originally a pagan holiday that the Catholic church co-opted? Isn't that where the tree comes from? There's no tree in the bible, does he have one of those?

(I guess they ripped off Easter as well, but they couldn't kill the bunny. They failed when it came to Halloween. Come on, do you go to church on All Saints Day?)

And Santa Claus is supposedly based on a Saint, good enough for me, but that's probably another fabrication from the church.