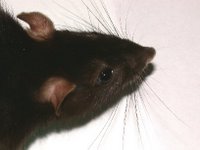 I know that many of you turn to this blog for news items that may portents of the upcoming apocalypse, and these items definitely fit in that department. I am of course talking about recent events, separated by thousands of miles, that may be hinting at the plague of rodents about to descend upon us.

First, in Belfast, where the BBC is reporting that a plague of "cat-sized" rats is starting to take over a neighborhood:

Odd quote, that. It seems to imply that the rats are afraid of non-human people; and really, aren't we all? Link

Second, we turn to Russia, where a group on squirrels mobilized enough to descend en masse upon a stray dog, tearing him to shreds:

They literally gutted the dog. When they saw the men, they scattered in different directions, taking pieces of their kill away with them.

While some experts theorize the squirrels may have carried out the attack as a result of a food shortages, I think we, as realistically-minded Americans who've seen movies about large groups of predatory rodents know exactly what's going on. And we all know the dire predicament we'll be in if these two armies are aware of each other's existance and choose to forge ahead in order to unite in an allied, fuzzy, beady-eyed army. Link
Posted by alpharat at 12:30 PM

*I think the first quote suggests that rats are people, too.
Come on, Alpharat. You knew that!

Rats ARE people too! Nevertheless, I would prefer they not take over my little town, thank you very much!

This post cracked me up in a scary sort a way.

The formerly meek shall inherit the earth...