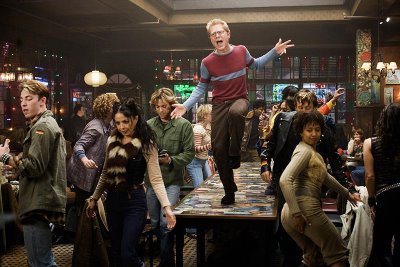 December 24th, Nine PM
Eastern Standard Time
From here on in I shoot
without a script
See if anything comes of it
Instead of my old shit…

I saw Rent last night. The film this time. I’ve been to the play twice now, so this is the third time I’ve seen it in some form. I can’t hear the music from Rent without feeling reborn, re-inspired and sad at the same time. Rent is the Hair of my generation. It’s the story of a bunch of close friends who are living life at the close of the 90’s.

How do you document real life
When real life is getting more like fiction each day?

Rent reminds me of a house in Kalamazoo 10 years ago. There were about eight of us living there. We were broke and starving, and the house wouldn’t get warmer than 40 or 50 degrees all winter. But we were really happy.

As long as there was money for beans, rice, and a case of Huber Bock (seven dollars for a case of bottles back then), we all had a great time. It didn’t matter that at least once a day our cat would give us a mouse or a bat she’d found in the basement, or that we moved our mattresses to that same basement to sleep next to the furnace where it was warmest. I have really fond memories of that time.

To days of inspiration
Playing hookie, making something out of nothing
The need to express, to communicate
To going against the grain
Going insane, going mad

I was going to film school, and I was going to make documentaries. Hell, I was going to be a frickin’ artist and I was going to write the great American novel, and die poor but loved forever by other poor Bohemian artists. I worked the door at a bar, and at 2 am there were always a bunch of us back at one of these old houses, drinking, smoking and figuring out where to go next.

To loving tension, no pension
To more than one dimension
To starving for attention
Hating convention, hating pretension
Not to mention of course, hating dear old mom and dad

We were the biggest bunch of freaks, and everyone knew it. Years later, we still meet people who remember being at our house for some gathering or another, and yet I never met. I like to think I was THIS close to being a legend, even if it was only in my own mind. There was not much further to go… some of you guys who read this were part of those days. Remember Julie’s birthday party when the Mad Butchers played in that basement with its six-foot ceiling? Remember Nicole’s birthday where everyone had to dress up as an associate of the Kennedy family or part of the assassination conspiracy? It was all high weirdness, but fun.

To riding your bike, midday
Past the three- piece suits
To fruits, to no absolutes
To Absolut, to choice
To the Village Voice
To any passing fad
To being an us-for once-, instead of a them –
La vie Boheme

What happened? I never planned on ending up in automotive advertising. Hell, advertising was a tool of the man. It was never something to trust; marketing was mind control. I was meant for bigger writing pursuits. The music from Rent turns me back toward these pursuits for a while.

And then sometimes, when I think about it, it hasn’t changed at all. I have a new circle of friends, and we have day jobs, but they are still the most amazing crazy bunch of dumbasses to be around. We talk about music and art, and we create music and art. We read, write and drink. The artist community is still there; we just grew up a little bit, and we can afford to drink better stuff. I would do anything for these guys.

The opposite of war isn’t peace.
It’s creation.

I think this post is getting really cliché, so I’ll end it with this: Go see Rent. It’s that good.

Also, if you think this post was pretty artsy fartsy, humor me and keep your frickin' mouth shut.
Posted by alpharat at 9:07 AM

I think this post was incredible, my daughter and her friend have been raving about it for awhile. They even turned me on to the cd. Love it, need to go see it. Yah.

stray_thoughts said...
This comment has been removed by a blog administrator.
5:04 PM

I thought this post was passionate and if not your best, then one of them.

I've never wanted to freeze my ass off in a pest infested basement before, but you made me wish I was there. You also made me want to see Rent.

Oh, but if you want to sell me some more on Rent then I think some pictures of Rosario Dawson might help.