Jiri Fischer - Down, hopefully not out 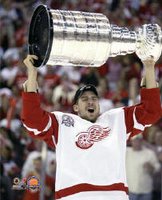 Last night’s Redwings game was the most upsetting, frightening sporting event I’ve ever watched, and it had nothing to do with the actual play.

We were watching the game over pizza and Guinness at Rosie O’Grady’s in Ferndale, when, midway through the first period, with the Predators up 1-0, play stopped. The camera panned to the Redwings bench, where all I , the viewer, could see was chaos.

The commentators were unsure of what happened, and were unwilling to announce the player’s name until they had confirmation. As they speculated over what had happened (Was he speared with a stick? Did he take a puck to the throat?), the paramedics continued to work, and Brendan Shanahan helped a young girl across the ice as they wheeled the player back to the locker room on a stretcher. The entire crowd at Joe Louis was silent, and the cameras showed the worried faces of the fans in the stadium.

Eventually the announcement was made: Jiri Fischer, our 25-year-old powerful defenseman, had a seizure. And just slumped over. And his heart stopped. He was conscious and responsive as they sent him to Detroit Receiving, but it was really scary.

It’s not something you think about when you’re watching a sporting event. In hockey, people get checked, they get cut, they get stitches. Occasionally someone gets really hurt, like when a puck to the chest stopped Chris Pronger’s heart a few years ago, or when an eye injury ended Yzerman’s season, and nearly his career, last year. There are all of these concerns that the players deal with and try not to think of; the last thing they’re considering is that their own health (and Fischer did have a heart abnormality) could be the one to put them on the stretcher.
So, I’m wishing Fischer a solid recovery, and I hope that he’ll be back on the ice soon. As my wife said last night, it would have almost been better had this been a puck or stick injury, because a seizure could point to a serious condition that could end his career.

Link to News Story
Posted by alpharat at 11:38 AM