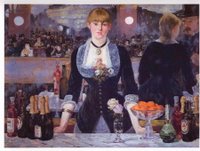 When we go to a film, nine times out of 10 we choose the Emagine. It’s not for it’s seats, sound or movie offerings. The Emagine is like every other multi-screen mega-cinema in the Metro Detroit area, except for one thing – they have a bar in there.

There is nothing like watching a movie with a cocktail or a large draft beer in your cup holder. And, with the price of theater concessions being what they are, alcohol is not much more then a fountain soda.

It surprises me that more places don’t cater to drinking patrons; it would generate more revenue and make your visit more interesting. Imagine if you were allowed to have a few drinks at the zoo, or at your local historical museum. It could make things much more interesting. And wouldn’t the edge be taken off of parent teacher conferences if you were allowed to do a tequila slammer with your kid’s math teacher?

Well, the latest alcohol-serving venue owes its existence to the Irish. A nursing home in Dublin has added its own pub – right on the premises.

Imagine if you, in your older years, were to end up in a nursing home. You don’t get around so well, but all of your friends are there. Wouldn’t being able to wander down for a pint make things a little more fun? That’s the idea here, where they believe the pub improves the quality of life, and actually extends the lives of the residents. From the article:

“We would say the whole social aspect of life does extend the years -- it means the patients aren’t bored to death,” Rose Mooney, assistant director of nursing told Reuters.

Also, wouldn’t it make you feel better about having an elderly relative in a home, knowing they had these facilities? And it would feel less uncomfortable to visit grandpa in the pub for a beer than sitting in the common room of a nursing home.

I think this is a great idea. I hope it catches on in the states, and if the time comes, my kids let me live out my golden years in a place like this, where everybody knows my name, even after I've forgotten it.
Link to story, originally found on Fark.
Posted by alpharat at 10:54 AM

I have never been more in favor of anything than I am in favor of pounding tequila shots with the kids' math teachers.

This should be a REQUIREMENT, people.

In addition, while I think Leelanau Coffeeroasting's cooperation with Grand Traverse Academy for fundraising is a step in the right direction, it is beyond me, completely, that Shady Lane Cellars and Chateau Grand Traverse have FAILED to step up to the plate as GTA fundraising partners.

If the kids can sell coffee at a $3 per bag profit successfully, they sure as heck would profit even more through wine sales.

Where is the community spirit of my local vinyards? Where, I ask!