It's about time we learned the Truth about the Religious Right! 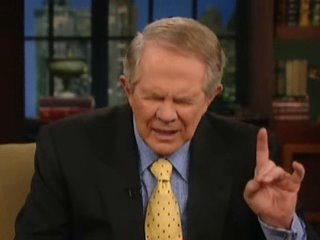 Pat Robertson, while appearing to pray on the 700 Club, flashed the Official Secret Devil Sign.

This hand signal, known (sic) arond the world as shorthand for "Hail Satan" confirms the allegiance of Covert Satanist Pat Robertson, also known as a 33rd degree Mason and notorious proponent of the Satanic agenda for Planet Earth.

It remains to be seen if his public display of Satanism will affect his popularity among his followers, as they often seem to be playing for both sides themselves.

I hate Pat Robertson. I think he IS satan.

Pat Robertson seems to be slipping into senility-ridden ludiocrity (Is that a word? If it's not, it should be... "ludicrousness" doesn't sound as cool.)

Richard Land is the one who scares the crap out of me.