My power is out - can I borrow a piglet? 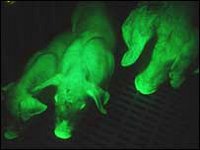 Scientists in Taiwan have successfully bred three pigs that glow in the dark.

In order to create these glowing pigs, they had to implant the DNA of jellyfish into pig embryos, which were then implanted into pigs. They are hoping that they will now be able to breed glowing pigs with the resulting offspring.

Imagine driving through the country late at night, and passing a darkened farmyard, lit only by the glowing mass of hundreds of glow-in-the-dark piggies. That's an awesome image!

Although they claim these pigs were created in order to study the effects of disease, I think we all know the real reason has to do with making Green Eggs and Ham a reality.

After all, as I've said before, what's the point in studying animals unless you get to eat them?

Link to story
Posted by alpharat at 7:44 AM

damn, i knew i was forgetting to do something. do you think it's too late to add jellyfish DNA to Beatrix?

Now I'm sad; my Sea Monkeys don't glow. I feel like they should glow, but they don't.

Do glow-in-the-dark pigs like glowing? What happens if they're enclosed with nonglowing pigs?

Monica, If you could make your baby glow, you wouldn't need to buy a nightlight.

Zilla, I guess it would all depend on where glowing pigs fit into the pig hierarchy, I would imagine quite high, but one never knows how pigs will react to things, does one.

Can't we get the same results by dousing them in nuclear waste?

Won't this make it easier for predators to kill the pigs at night?

What kind of lumens are these things putting out? How many pigs would it take to replace my front porch light?

If I eat a glowing, green pig will my poop be glowing & green?

These are the important questions that we need answers to.

If they were to introduce these "glowing" pigs in Iowa you would be able to see our state from...well YOURS!

With 15.6 MILLION hogs that could create a lot of glowing power!

why? why? why? I liked the pink pigs just fine. next they'll be putting them in breakfast cereal without permission.