Come on everybody! Let's go to Djibouti! 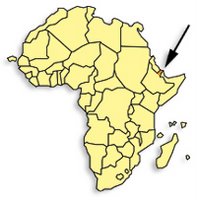 One thing that was brought to my attention by Mark this weekend:

There is a country in Africa called Djibouti.

It’s in East Africa, near Ethiopia, and has a population of about 460,000. It’s official languages are French and Arabic, and it suffers from a 50% unemployment rate despite it’s prime location as a shipping port.

That’s all for now… see you in Djiobouti!
Posted by alpharat at 12:53 PM

At the renaissance fair, the past couple years the stage next to our shop has been The Zucchini Brothers, who have a joke. It involves one Brother talking about going on a USO tour and all the countries he visited on that tour. After a big list of countries ending in "stan," he says they also went to Djibouti.

"you know where Djibouti is? It's right above Dji-legsies"

I didn't say it was a good joke.

A little off topic...
(though still chuckling at Mike up there)
When you go to Djibouti, do you mind finding some Internet access over there, and giving my site a click? It really bugs me that no one in Africa digs my site.

Also, as always, send me a postcard. I DO have a postcard from Djilegsies, but not Djibouti.

I'm still reeling from the fact that Mark knew this....

wasn't that also a character name in the Buckaroo Bonzai movie?

There was a song about that.

I know you gave a blog-exemption on spelling errors in the above post, but I'd like to point out you misspelled "Djibouti" at the end of this one. Ironic, yes?

By the way, I've been Djibouti is lovely this time of year ;)

No, I was actually referring to the way they spell it in Djibouti, as opposed to the Ameicanized spelling...

Well, I left an entire WORD out of my comment.

It should have read:

"By the way, I've been told Djibouti is lovely this time of year ;)"

Abishag...getting a little catty, aren't we?

Actually, I had to bring it up b/c there was an entire NPR Report about the state of Djibouti.

And Abi? Djibouti is not doing well.