Bring me the head of Wolfgang Amadeus Mozart! 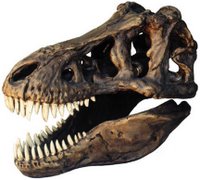 On Sunday, researchers are going to announce if a skull that’s been collecting dust for over 100 years belonged to Mozart.

Long story short is that Mozart was buried in a grave, dug up, and the gravedigger supposedly kept his skull.

Sunday is Mozart’s 250th birthday (I know! The guy looks good for that age!) and to coincide, researchers who have done some DNA testing on Mozart’s descendents are going to announce whether or not this skull is the real deal.

What if it’s not his skull? The museum that’s had it for all this time is gonna be all embarrassed.

More importantly, if it’s not his skull, that means the real Mozart skull is out there, lurking in the shadows, waiting for the right time to strike.

Link to story
Posted by alpharat at 8:30 AM

uhhh, tell me that isn't a picture of the skull in question...i never heard of mozart having a set of chops like that.