Somebody should of pointed this out before 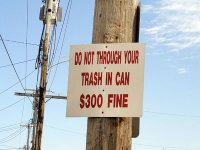 As I've mentioned before, I get a bit peeved by bad speeling. I mean spelling. It's not that I'm not tolerant; I am. We all make mistakes, sometime we use the wrong version of its/it's or there/their/they're, but when something is glaringly obvious, especially in something that has been created for public display, I just find it inexcusable. How could you not get someone to check these things?

One of the latest was the prominent sign in a local department store advertising their massive merchandise "Clearence".

Seriously, how hard is it to say, "Hey Bob, I just wrote this. Will you look it over for me?" As a writer and editor in my day job, that's what I do.

When you're throwing together a blog post, the occasional indiscretion is fine. When you are doing something for a client, something that may be viewed by thousands of people, there's no excuse for not having a fresh set of eyes look at it.

It seems that it's not just a problem in the US; the Australian Labor Dept. is calling for the Treasurer of the Australian Parliament to be fired over a typo. Apparently the document on the Federal Government's industrial relations changes was released with a glaring error:

Another thing I've noticed lately is that people are using "should of". As in, "I should of done that." Regardless of how it sounds when you say it, it's "should have". (Although I will also accept "should've".)

Before I step down, I want to mention my new calendar. It's the Eats, Shoots & Leaves calendar (if you've not read this great book on punctuation, and consider yourself an aspiring writer, you really should). Friday, it had a great quote that I will offer up to anyone who may seek to criticize this post:

When sticklers point out illiterate mistakes, we are often aggressively instructed to "get a life" by people who, interestingly, display no evidence of having lives themselves.

I don't think I could of said it better myself.
Posted by alpharat at 8:35 AM

Thank you. I could of sworn I landed at the wrong blog when I read the title of your post. What a relief!

Love "Eats...Leaves." Smart as a whip and hysterically funny, that woman!

Angeline Rose Larimer said...
This comment has been removed by a blog administrator.
5:15 PM

You guys are so DAMN CLEVER!
Honest.
I LOVE it.
When I think of the gajillion other people in the world who would of scratched their heads at the grammatical comic genius of this post.

My problem: I make a lot of mistakes because I've been spending so much time writing how people talk.
So be gentle on me. With me, too. Geesh. Too much pressure with this comment!
(Just put me Strunk and White right next to me Ayn Rand...and I've got the Lucky Charms leprechaun dialect stuck in me head.)

My favorite is irregardless. I hear and read this from people in the business world on a daily basis, and it drives me batty. But, what's most disturbing is the memos and newsletters I get weekly from my kids' teachers and principal that include not only misspellings but wrong word choices and incorrect punctuation. Too much.

Abishag...DO NOT get me started!

Okay, I'm started. My SIL is the world's WORST speller. Example, she insists on spelling camera..."camara."
Her penmanship looks like mine...when I was seven.
She also tries to cover her shortcomings by using 'grown-up' words like, "pleasant." As in, "So glad you made it to my party. We had such a pleasant time." Yeah, you can tell by the language, it was one kick ass party. Woo hoo.
I know some people hate writing me for fear I'm constantly judging them. I DON'T..BUT SHE IS A SIXTH GRADE TEACHER!!
She MUST have students who spell better than her.
Frightening.