Perhaps there is a little Alistair Cooke in all of us 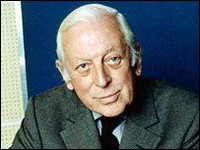 When broadcaster Alistair Cooke died of cancer a few years ago, his family had him cremated and they spread his ashes in Central Park.

This was apparently not before body snatchers had the opportunity to steal the old guy’s bones and sell them on the black market.

One would think the bones of a celebrity of Cooke’s caliber would fetch a hefty sum if brought to the right collector. Alas, this was not the case. The bones were sold for $7,000 to a “tissue processing company”, to be used for such items as dental implants on unsuspecting donors.

This is illegal for two reasons. One, it was done without his family’s consent, and two, because the broadcaster died from cancer that had spread to his bones, they were diseased, and so will be any implants created by them.

This whole gruesome story aside, it does create a cottage industry for the owners of certain estates. Suppose you had a parent who was a famous musician. After their death, along with selling their songs to beer commercials, you could also sell their bones to be implanted into aspiring artists.

Personally, I’d take a pinky transplant, just so I could say, “Oh yeah? Well I have more talent in my little finger…”

Link to story
Posted by alpharat at 1:14 PM

Ahhh, you don't need a transplant for that. You've already exude talent from your pinky finger, and your middle finger, and the thumb.

What do you know about Alpha's fingers that we don't?

Ooooh, Mr. Stray...you are a dirty, dirty man. I heard he was quite the pottery maker--excellent at whirring his wheel.

If you guys don't cut it out, I'm gonna ban comments!

and here I was trying to figure out how to make a great gang jesture with MY pinky, middle finger, and thumb, abishag. Wasn't workin' for me. Glad you cleared that up.

I don't know where that came from.

That story sounds like something from The Onion. I'm unconvinced by certain aspects of it.

First of all, the story leaves out any mention of WHERE the corpse was dismembered. Was a funeral home or crematorium broken into? Was Mr. Mastromarino running a shady cremation service? If either is the case, why is this not explained in the story?

How did they get caught? By whom?

"bones could have been used for dental implants or numerous orthopedic procedures, including dowels for damaged spines."

First of all: Dental implants are not made from bones, period; They would wear down after a few days of chewing with them.

Orthopedic procedures? I know a LOT of people who have had "orthopedic precedures", and 100% of them involved space-age metal alloys (such as pins and rods).

The same is true for a "spinal dowel". Are we in the middle ages? How about a nice titanium rod?

This is either a very poorly-researched story, or someone's leg is being pulled.