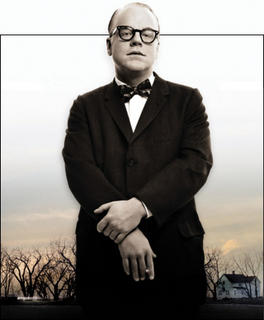 I saw Capote this weekend. I won't bore anyone with too many details in this review; I will keep it short and sweet, based on my impressions rather than too many details.

In November of 1959, Truman Capote read a short news story about a family in Kansas who had been murdered. He traveled there to write a story for the New Yorker and ended up getting very close to those involved. He ended up sticking with the story for several years, writing In Cold Blood, which essentially created the True Crime genre. Capote spans this time period.

If you consider yourself a writer of any form, see Capote. The process of his compiling the story is fascinating, and it truly glamorizes what it means to be a writer. It's also disheartening; I don't know how accurate Philip Seymour Hoffman's portrayal of Truman Capote is, but he comes across as an individual who is eccentric and captivating, while at the same time he's an egocentric, self-centered ass.

Capote spends much of the film focused on himself, and his own needs, and projecting them on the case. As the killers are granted various appeals in their case, he actually expresses dismay because it's delaying the completion of his novel, even though he's gotten close to them and been granted exclusive access to them for interviews. They consider him a friend with their best interests in mind, and he considers them literary tools to propel his next novel to the bestseller list, which it ultimately does.

All in all, I loved this film. It lagged in a few points and could have been about 10-15 minutes shorter, but I was ultimately impressed with it all. I left the film inspired to write, and to learn more about Truman Capote. Embarrassingly, I've never read In Cold Blood, but I'm actually picking up a copy today.


Link to Film Site
Posted by alpharat at 8:39 AM

I have neither seen the movie nor read the book, but I have read about Truman Capote... And my impression is that Yes, he was concerned mostly with his novel, and not with the subjects of it.

It's not all in your head.