Make time to see the zoo, while you still can. 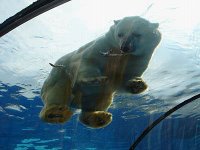 Just when you get excited about everything Detroit is doing right, they come along and show you how badly they can screw things up. The Detroit Zoo, which has been open and operating in its current location since 1928, may be slated for closing.

Detroit is in serious financial trouble; this is nothing new, but it keeps getting worse. One of the latest revelations is the fact that they city can no longer afford to pay the $4-5 million required to operate the zoo each year. This is not surprising for Detroit; the city also allowed the nation's oldest aquarium to quietly cease operations last year.

The Detroit Zoological Society, a nonprofit organization, approached the City of Detroit with what sounded like an excellent solution: they would take over the daily operation of the zoo. The City of Detroit would retain ownership of the land, animals and facilities, while transferring all operating costs to the society.

In what can only be viewed as a vulgar display of egotism, the Detroit City Council rejected the proposition. Additionally, because they were unable to reach a decision by the state-mandated deadline of Saturday at midnight, they forfeited $4 million in state aid for the zoo as well.

So in the end, it looks like Detroit gets to keep its zoo. A zoo it can't afford to run and will have to close. In fact, in the only instance where the city has ever moved quickly or decisively, they laid off 150 zoo employees today. I'm guessing the rest will only be around long enough to lock the gates.

Anybody have room for a homeless polar bear?

Link to Story
Link to Detroit Zoo's Site
Posted by alpharat at 1:12 PM

These people need to be stopped...
this is just sad and pathetic. Every child that grew up for 100 mile radius spent time in that zoo on field trips or with family.

The only upside...at least the animals will be free from this city's sickening downward spiral...b/c last time they did suffer.

Is it fiscally feasible to privatize a zoo?

How wrong is that. I try to keep the faith for Detroit. Really, I do. It gets really really hard.

So... When was the last time you went to the Detroit Zoo?

I am unconvinced of the inherent necessity for zoos, for purposes other than scientific ones. The original concept of a "zoo" was to bring exotic animals to people who otherwise would never see them. In the age of the Discovery Channel, this is somewhat unnecessary... Especially when that you consider that zoo animals are not in their natural environments whatsoever.

Since I was little, my impression of zoos has been this: Animals are prominently displayed to the public, in viewing areas that attempt to make hiding from zoo visitors impossible. And the animals do their absolute best to hide anyway.

I don't go to zoos. It makes me sad. It seems a little selfish to cage animals simply for my viewing pleasure, as if they exist simply for our entertainment. (On the other hand, I've scuba-dived around the globe, which means that I visit wild animals in their natural environment.)

The reasons that the Detroit Zoo is closing seem to be pretty pathetic, from a city-planning perspective. But fretting about "homeless polar bears" is a little silly... Other zoos will be glad to take in the animals. They're not going to have to set up camp in the Book-Cadillac Hotel, although it would make a great Disney movie.

A. I go to the Detroit Zoo a minimum of once a year, usually 3 or 4. Taking my nieces is one of our rituals (I live less than 2 miles from the zoo.)

B. Many of Detroit's Animals are rescues from terrible conditions.

The Lion? A former "security guard" in a crackhouse

One of the Polar Bears? Rescued from a Puerto Rican circus. She'd never seen snow before she came here.

C. I don't know if you've ever been to the Detroit Zoo, but its exhibit designs are ground-breaking and innovative.

The gorillas and chimps are in exhibits that are so large and with so few viwing areas that it's entirely up to them if they want to be seen. We see gorillas only a quarter of the time we're there. It's because the Zoo is part of a conservation and breeding program.

Tha same goes with the polar bear exhibit - the largest in the world. Some days, the bears are white balls of fur in the distance. This is how it was possible, in less than a year, to create a stable enough environment that Berle, the bear from Puerto Rico, was made comfortable enough to give birth to Talini, her first cub. Additionally, mother and baby had no human contact (not even with keepers) until mom was ready to bring baby out of the den, about three months after the baby was born.

Also, the Detroit Zoo has no elephants. Wanda and Winkie, the zoo's elephants, were sent to a ranch out west because the zoo decided that elephants were too intelligent for an enclosure. They did this in defiance of orders from the AZAA, and almost lost accreditation over it.

Zoos may not be the ideal situation for animals, but we've created a nedd for conservation-oriented zoos due to our actions. Sure, the animals may be sent to other zoos, but I seriously wonder where they will have a better environment.

On a final note, I'm glad you have the means to scuba dive around the world. This is Detroit. This zoo is the closest many kids in the city ever get to any wildlife other than rats, possums and squirrels.

Awesome...I was going to answer with the elephant thing, but that kicked ass.

Only one thing...Don't forget the wild dogs. Kids in the city of Detroit get to see and experience the joy of the Pitbull & other large feral dogs in their natural habitat...roaming city streets.