Music for the moment: Plan 9

It's been a strange day with some weird sad events. Just as I was posting a review of the new Plan 9 album to my music site, I got an email from Plan 9's PR person. It seems that Plan 9's frontman, Aaron Fuller, was killed in a motorcycle accident early Tuesday morning. He was a really talented singer with an amazing voice, and Plan 9 was the closest thing to a Misfits replacement since Danzig left that band.

I also found more information on the Ghost Bike locked to a sign near my bank. The person that was hit and killed was a 40-year-old woman. She was a single mother of two kids who worked taking care of a 90-year-old man. She didn't have a car, and the bike was her only mode of transportation to and from work.

The person that hit her dragged her for 100 feet and fled the scene. I don't know what kind of monster would do something like that, but I hope they find the person and put them away.

I also sincerely hope she was killed instantly, and the person didn't leave her there to die. There's a special place in hell for a person who would do that.

Another disturbing aspect of all this are the people who commented on the story, especially the original story. They suggest that cyclists are at fault in these situations. These are people who've been inconvenienced by being behind cyclists, not realizing or caring that we have the same rights and are required to follow the same laws as a motorist.

When I ride the roads, I ride extremely defensively because of people like this; people who think nothing of running a bike off the road. I never assume that a car has noticed me, often they look right past you. I have a friend who has been hit three times now, simply because people don't pay attention.

I don't want to get on a high horse (or a tall bike in this case) in this situation, but whether people are riding for fun, fitness, transportation choice or because they have no choice other than to ride a bike, they deserve the right to share the road, and to do it without fear of being killed. Cyclists have a real need to be cautious, too, because whether or not they are in the right, they will ALWAYS lose in a car vs. bike confrontation.

Incidentally, she wasn't the only cyclist killed that night. In this case, the person turned himself in the next day, saying he thought he hit a deer.

Did he really? If you hit a deer, wouldn't you pull over to check? Again, my fear is that, at the time, he knew what he did and panicked, leaving another cyclist in a ditch to die. 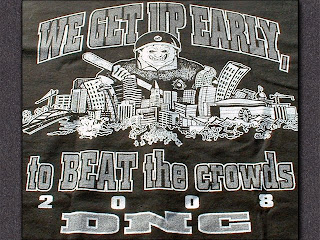 Sad cycling news aside, there are other sad news items that have been making me shake my head. In Denver, the people who perpetrated the violence upon nonviolent protesters are celebrating the fact, and using this occasion to profit.

The back of the shirts reads, "We get up early to beat the crowds" and "2008 DNC," and has a caricature of a police officer holding a baton. (Link)

So what you have is a situation where police were able to violate the First Amendment rights of this country's citizens, and then are allowed to joke about and profit from it. But we're not heading toward a police state.

If that's not enough distressing news, apparently Sarah Palin believes that man walked the Earth with the dinosaurs. I won't go so far as to say that she's not intelligent, but she's apparently not very well educated or well read.

That's probably the case, as she is the person who asked how she would go about getting books banned from public libraries. This bit of old news is especially relevant this week, which happens to be Banned Books Week. If you do nothing else, make a silent statement of rebellion by reading a book that has faced a ban. There are plenty of good ones on the list, and who knows? If things keep heading in the direction they are, this may not always be a guaranteed right in this country.
Posted by alpharat at 1:34 PM

This is a lot to process, for one post. It generates no small amount of rage, I mean, so I don't know where to start.

Okay -- there's this: my house is on a street that features a bike lane, and I love that about my street. I love watching the bikers go by, whether they're racing or commuting or just out getting some exercise. I love riding my bike down my street, even if I do time my rides for low traffic and the accompanying freedom to wander in or out of the lane at my whim.

On one occasion in just over one year, I have come too close to backing out of my driveway into a biker. And I was being as careful as ever at the time.

You know what f*cked me up? Those trees on the neighboring lot. They blocked my view of oncoming traffic -- cars, bikes, and joggers alike.

The neighboring lot is Barbara's lot.

Those trees are gone now.

It was totally pissing me off that those trees are gone, until I remembered the biker I almost backed into.

So there's my silver lining in the nastiness going on next door to me.

If I killed a bicyclist, I'd shoot myself.

PS: Your review was very well written -- one of the best to date.