The Fine Art Of Letting Yourself Go

We've has some big parties over the years. Parties that generated a lot of empties.

I've also put off taking back bottles for a few months before, and let them stack up in my basement.

I think our record bottle return was in the neighborhood of $30. That's about 300 empty bottles and cans for my readers outside of Michigan and its 10-cent bottle deposit. Most of these were from a BBQ that had about 75 people attend. Not that high of a number when you think about the per person ratio. 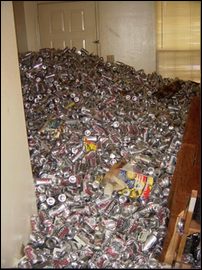 Apparently, 300 bottles is nothing. In Utah, this guy drank 24 cans of beer a day for eight years. And he never got rid of the empties.

When somebody finally looked in on his townhouse apartment, the cans were piled high, waste-deep throughout the apartment. There were approximately 70,000 cans ($7,000 in returnables if this had been Michigan).

The worst thing about it is that it was all Coors Light. This actually makes it less surprising to me. Hell, maybe Coors should hire the guy to be their spokesman (Unfortunately for Coors, the guy has since stopped drinking and cleaned the place up). 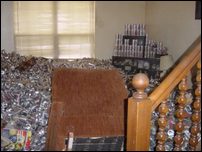 How could you live like that? I've let my house get messy (quite often, actually). I've let laundry pile up in the hallway. Hell, I even have a couple dirty pans in the sink right now and my lawn is quite long from all the rain, but to just let it go like that?

At some point, say a few weeks into it, is there a point of no return where you say, "Screw it." And just let it go from there? At some point do you just get used to it and accept it? At some point, is it actually OK with you?

I don't know, but I think I'm gonna mow lawn first thing tomorrow morning.
Posted by alpharat at 9:43 AM

I so wanna dive into that pile of cans! Scrooge McDuck eat your heart out! It's like a beer drinker's version of the ball pit at Chucky Cheese's! (even if it is Coors Light...and I do prefer bottles, but I think that would hurt and be much more potentially dangerous)

All good points, stray_thoughts. I'm just having trouble not imagining the horrible, horrible stale beer smell and envisioning army upon army of drunken cockroaches, so I'd have to take a pass on the beer can ball pit scene.

yes, I realize coors light is water. but, still, you could say it was the equivalent of 12 beers a day...WHICH IS STILL A LOT!!!