Bionic Beer Muscles - How can this possibly be a good idea? 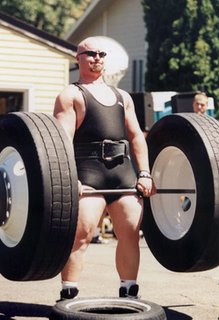 The concept behind beer muscles is nothing new. It's a simple fact that, while in an intoxicated state, the human body is capable of feats of strength that it couldn't accomplish while sober. Just as a mother on an adrenaline high can lift a car off her child, so can a couple of drunken college kids raise an old busted console television high over their heads, and carry it down the street and into an alley in order to properly work it over with a crowbar.

Beer muscles are not a force to be reckoned with. Improperly used, they can have devastating results. Fortunately, beer muscles do have a limit to their power- until now.

Science has decided to trifle with the affairs of gods, and create beer muscles of superhuman proportions.

Under the guise of creating stronger, more efficient prosthetic limbs, researchers at the University of Texas in Dallas have successfully developed artificial "super-strength” or "bionic" muscles that are powered by alcohol.

That's right. Super-powered muscles that are fuelled by alcohol. In the wrong hands, an evil genius could use these implants to create an army of stumbling supermen. Can you imagine? Fearless hulking beasts who get stronger with each sip of beer, until they go on a drunken rampage, overturning cars and pushing down walls.

I think we can all agree; science must be stopped.

Read the horrible truth here.
Posted by alpharat at 11:42 AM

Don't be such a naysayer. This is two of my dreams come true...

...to have super-human strength and to be drunk all the time!

I would have super weeping and vomiting abilities after making an ass out of myself by attempting to do stand-up from a dance cage during a hot bod contest.

Not a good idea for me.
But, if I could hand Tom a beer or two and end up with a mowed lawn, that would be nice.