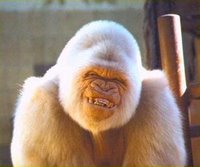 Thanks to Writer Mom and family for helping to preach the Good Word!
Posted by alpharat at 8:44 AM

Writer Mon & her family are awesome and they look great in their new T-shirts. Thanks again.

...but who's the "one monkey who stood in front of all other monkeys"...I hope that's you b/c I don't do public speaking. I'm not to bad at the rejoicing and the rocking of the world, as long as the wine is flowing, but that means I was probably the monkey who got drunk and said that one thing...sorry about that...

I would like to study this Book of the Church of Rotating Mass.

And is there a congregation near Indy? You don't have to ride a mountain bike to join, do you?
Do you get beer at communion?
Do we join a commune?
So Jamoker and I will be in the TC area around the 3rd of July. I'm sure you already know the route for the next big race, but just thought I'd mention. We're meeting Zilla, by the way.


A brand new SAT question for you:

Under the dome of silence: