I never realized my iPod was so un-American. 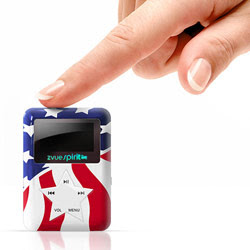 I saw this ad today for the Zvue Spirit, though, and all of a sudden I realized that I can never truly hope to be a real ‘Merican unless I owned this starred and striped monstrosity, and honestly, during election time, we should be doing all we can do to prove that we are true ‘Mericans, voting for the most ‘Merican of the candidates.

The best part of this little handheld MP3 player, is that it comes pre-loaded with a stack of real ‘Merican music! You get:


That’s right! You get no less than THREE SKYNYRD TUNES, because Skynyrd is the most ‘Merican band of all time!

Seriously though, if you don’t mind it’s gruesome nature, it’s on sale for 12.99 on Buy.com right now. That's a pretty good deal for a 1GB MP3 player, even if it’s as obnoxious as all hell.

Also, how much you want to bet it's made in China?

Even so, I bet this girl has one:

The debate is on tonight, but I’m going to the Red Wings game. Hockey is distinctly Canadian, which probably brands me as somewhat unpatriotic. Please don’t judge.
Posted by alpharat at 9:10 AM

I just watched that interview over on Dooce.
Palin's like the wild brother's new girlfriend who everybody's so nice to in the beginning, because they're really hopeful she'll be the one who settles him down, then they all realize she's crazier than he is and can't wait for the break-up.

But back to that MP3 player.
I need it for my Halloween costume!

MrZ is smiling about your choice to go to the game. Believe it or not, I applaud your decision as well. There is something beautiful about refusing to get caught up in the recent bullshit.

I was going to skip the debate when Moose called me at work this afternoon to notify me that Zenzi has developed a bad case of the shits. A dog with the shits is a crisis requiring much sanitizing, and at my age I just don't multi-task the way younger dog owners do.

If they're serving High Life tonight, drink one for me!

I started trying to watch the debate but ended up bidding on shit on ebay, and blogging.