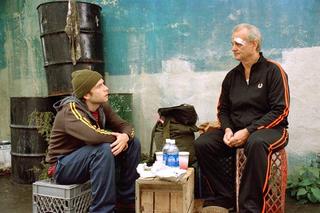 When Darren at the Belmont gave us free passes to the sneak preview of Broken Flowers, I was pretty excited to go. I’m a big Bill Murray fan (apart from that Lost in Translation piece of crap, but more on that later), and I thought that The Life Aquatic was a great movie, as much for the performances of the actors as for the great use of Portuguese Bowie covers in the soundtrack. As for Lost Flowers, I don’t care what the critics say, if you have a modicum of cinematic taste, DO NOT GO SEE THIS FILM!

It’s not that it’s a bad movie. I mean, it’s OK; it’s a decent movie with some great characters, and some great acting. Bill Murray, Jeffrey Wright, Sharon Stone and Jessica Lange all deliver stellar performances. It should have been a great film and yet, somehow, it’s not. The result is decidedly lackluster. It’s just mediocre, with a pretty unfulfilling ending.

In fact, the more I think about this movie, the less emotion, positive or negative, I seem to have. And maybe that’s the existential message Jim Jarmusch wanted us to take away, maybe he wanted us to show us that life is neither good nor bad, life simply is. In order to make us realize this, he created a movie that followed this example.

You’ll like this movie if you liked Lost In Translation, and by that I mean you’ll like this film if you’re the pretentious sort who goes to independent films just to say you went, and when you don’t understand a film or simply think it’s awful or even just not so good, take it as a fault of your own, rather than the fact that the filmmaker failed to accomplish what they needed, and so then pretend to have loved it, and further the problem by recommending it to everyone else. If you didn’t like the film or didn’t understand it, DON’T LIE ABOUT IT! People like you are the reason that The English Patient did so well! (The one defense I have of Lost in Translation is that it had some great moments, and it would have made an awesome 30-minute short. The rest was all filler. Broken Flowers didn’t really have the filler; it was full of great moments and great acting, and yet, all I can say about it is “meh.”)

You won’t like this movie if you like a smart script that is able to deliver from beginning to end. You also won’t like this movie if you want to see a movie with dinosaurs or monster trucks, which is why I am glad we finished up the evening at Tony’s Sports Bar drinking cold PBRs and discussing the modifications you’d need to make to a Ford Expedition so that it could be driven by a velociraptor.
Posted by alpharat at 9:29 AM

As you know, I didn't get to see Broken Flowers so I'm a poor judge. I thought Lost in Translation really wasn't that terrible, but maybe it's just because I thought it was such a great achievement for Sofia Coppola to make a mediocre movie as opposed to an awful one.

Jarmusch, on the other hand, is for the most part the picture of mediocrity with a handful of great stuff to fill it out.

Just tell yourself this: At least Benigni wasn't in it.