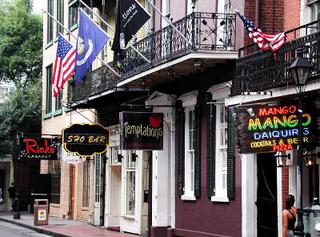 It was a fun eventful weekend, and I’ll probably get to details on that, someday, but I wanted to talk about something that’s been heavy on my mind all weekend – New Orleans.

As I’m writing this, Hurricane Katrina is hammering New Orleans. Now I know that a million people are writing about her, with a much higher eloquence than I, so I’ll keep it short.

Everyone knows that New Orleans is sinking at a measurable rate. What nobody realizes is that this is not a natural phenomena. Through the sheer weight of its decadence, this city is actually being cast down into Hell.

Every morning, the French Quarter squints at the harsh light of the humid Louisiana sun, a little sore and a little embarrassed over the previous night’s revelry. The street smell like beer, vomit and urine, and the very walls of the buildings seem hung over. Then, in a moment of divine absolution, comes the morning rain, which cleanses the streets, absolves all sins, and allow for it to happen all over again.

I love New Orleans. I could never live there; I would drink myself to death inside of six months if I tried that move. But many of my favorite things come from New Orleans: Pat O’Brien’s Hurricanes, Shrimp Po Boys, Abita Breweries Turbodog, Zapp’s Potato Chips, and author Poppy Z. Brite.

In addition to loving her writing (I urge anyone with a love for either New Orleans or food in general to pick up Liquor, and then to read Prime and I'll even go out on a limb to recommend the third book, Soul Kitchen, which is currently being finished up), I read Poppy Z. Brite’s livejournal daily. She and her husband have evacuated to Mississippi with just their computer, a dog and cat, and a few prized pieces of literature.

This prompts a side-discussion that Nicole and I had last night over a damn fine Mexican dinner and some margaritas; if you had to evacuate your home, and you didn’t know if it would be standing when you returned, what would you take? I think we settled on the computer, the photo equipment, the dog and cat, and the art (our paintings, and any photographs and negatives that Nicole had taken prior to her digital conversion, as those are archived to CD). We’d take the mountain bikes if we had room, too, but it really makes you think. We have a lot of junk, and while it seems to make us happy, how much of it do we really need? Not as much as you’d think. Ok, throw some clothes in there and a toothbrush, too. It’s still not much.

So I hope New Orleans weathers the storm well, and damage is minimal. I think some might say that this is the time for the city's ultimate cleansing, but I hope not. I hope the French Quarter is spared, and I hope to get back there again, to drink myself stupid and celebrate the city’s rebirth.
Posted by alpharat at 8:00 AM

If New Orleans should indeed sink to its inevitable demise, we shall all think sadly on days of staggering with plastic-cupped hurricanes in hand. Of being shoo'd or dragged-in after trying to get a free listen-in on a phenomenal blues band. Of witnessing public vomitting outside a college campus. Of the brief wind coming off the Mississippi that always takes my mind to a rascally political junkie called Mark Twain. And, of the best damn food this country has to offer in a three-block area. Eat up and pass the tip cup.

A necessary addition to your book list: A Confederacy of Dunces by John Kennedy Toole.