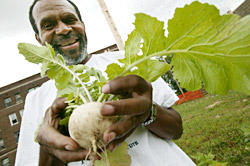 I love living on the edge of Detroit. It has a plethora of great restaurants and a vibrant nightlife with great bars, clubs and live music venues.

That being said, I couldn't live in the city proper because of all the things the city still lacks. These include a stable tax base, an honest city government and grocery stores.

Within the city, there is a deplorable lack of grocery stores. The Eastern Market is the place in Detroit to go for produce, but most vendors are only there on Saturdays; if you don't live in the neighborhood, and don't have a car, you're in a position where the only option for groceries is that party store on the corner.

I don't know how it is where you live, but party stores in Detroit are not known for an economical selection of quality family meal options, unless your idea of a family dinner includes malt liquor and pork rinds. And if it does, can I come over for dinner on Sunday?

The city does, however, have an abundance of vacant lots. Taking advantage of this, residents of neighborhoods and various community groups got together, and created the Detroit Garden Resource Program. With about 80 community gardens in the program, neighborhood residents not have ready access to fresh produce, in return residents provide a few hours in the garden.

This is an awesome idea, and I think that it could lead to an amazing experiment. What if, as Detroit gears up for the SuperBowl, all of the abandoned buildings and burnt-out houses were bulldozed, creating more vacant land? Could Detroit become the first city to see rebirth through an agricultural center? And, if enough land were freed up (current estimates say that one quarter of Detroit is made up of vacant land), could this lead to livestock and possibly even forests within the city limits? What do you think?

I think the pheasants would love it.