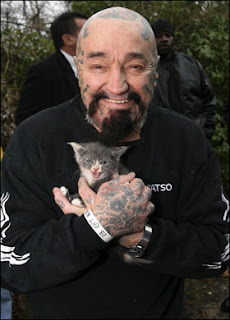 I love this photo.

It's from a story about a group of bikers who rescued a neglected bunch of kittens in New York.

But that story made me want to research it more.

The guys are part of a group called Rescue Ink.

Rescue Ink is an animal welfare group composed of big tattooed hot rodders, bikers, bodyguards and other people associated with positions that call for the big and badass. They perform animal rescues.

How awesome is that?

These guys know they're intimidating looking, and rather than simply use that to get ahead, they use it to help the ones who can't help themselves.

No offense intended to the 90-pound scrawny vegan animal rights activists. Animals need all the help they can get, and you're important too.

It's just nice to have these guys in the corner of the animals as well.

Also, the guy in the photo?

Link to Rescue Ink.
Posted by alpharat at 10:05 AM

That wee kitty looks meaner than Batso, but I'm sure it's all bluster.