Zilla's post about the latest addition to her family got me thinking about Shane, and how he came to live with us.

You see, shortly after Nicole's giant Newfoundland passed away we had decided that we were ready for a new addition to our family. We were engaged, and we already had a big, angry cat, but we were ready to take that next step and ask a dog to come live with us.

We went to the animal shelter on a near daily basis. We looked at dog after dog after dog. We played and petted with dogs, and fell in love with some and felt pity for others. I at one time had Nicole pretty much convinced to get one of these. 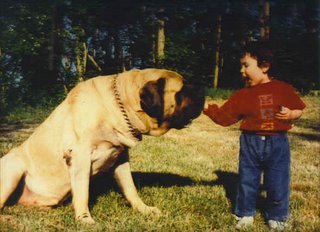 He was this big, too. But he was very sick and the people at the animal shelter were convinced he was going to be very expensive and probably wasn't going to survive. We didn't have the money (we were still college students at the time, waiting tables), and anyway, after the heartache Nicole had gone through with losing her dog, it wouldn't be fair to ask her to take that on again.

One day, someone at the animal shelter told us they wanted to show us a dog. They took us to the back of the section reserved for older dogs, and showed us a homely little mutt that they insisted was perfect for us. This dog was skittish and jumpy, and really not a good fit at all. It was quite obvious there was no love connection.

But, right next to this dog, in the furthest cage from the entrance, was a little black and white husky. Shoved in the back, with the adult dogs and the dogs with the the signs that said "I bite" on the door.

Nicole asked the employee, "What about this dog?" The employee seemed very indifferent about him. Nobody was quite sure about why he was shoved in the back, he just was. Nicole reached into the cage, and he was so relieved to have physical contact, he just melted against the door. We let him out of the cage, and he reared up and just wrapped his front legs around Nicole's waist and pressed his face into her stomach. He stood like that for a long time.

Some other people were there, looking at dogs. They saw Nicole holding this dog and asked, "Is that your dog?"

It was the love connection we were looking for.

There were a few problems.

One - He had been shoved in that back corner for a week. It was his last day. He was due for execution the next day.

Two - We were renters, and while we had our landlord's permission to get a dog, the animal shelter would not let us take the dog until they had spoken with him on the phone. Our landlord was not a reliable person, and just like when the tree fell on our house and laid on it for two weeks, he was nowhere to be found.

Three - In order to adopt the dog, we needed to pay up front to have him fixed. While getting him fixed was on the agenda (listen to Bob Barker, kids!), that was a prohibitive expense at the time.

These problems could be circumvented in only one way. If the dog's actual owner were to show up (which wasn't going to happen, as he'd languished in that cage for a week), the dog would be released immediately, for just a few dollars in impound fees. As I said, the people at the animal shelter knew us, and they knew we were looking for a dog, so we couldn't pull that ruse.

On the way home, afraid that this little sweet dog was about to meet an untimely end, we hatched a plan.

We stopped at the store to buy a leash and a choke chain (the dog had no collar, and we had no idea what size to buy) , and then went to D's house.

We returned to the animal shelter, and Nicole and I walked into the dog area. Nobody gave us a second glance.

A few seconds later, D entered the animal shelter and informed the people at the desk that he had lost his dog. They said he could go look. When he entered the area, we were standing in front of the cage. I subtly pointed out the dog, who seemed saddened when we walked away.

We went back out to the car and waited. $50 in impound fees later (Although at one point, while D was paying the fees, Shane shook off the choke chain. Thinking quickly D simply said, "Yeah, that's how he got away the first time."), D and Shane walked out. Shane gave me look that said, "Hey! I know you!" and hopped into the car and onto my lap. I drove him home that way.

So that was about 10 years ago. Shane's a bit of an old-timer now; he spends most of the time lounging on his dog bed. We've had some big adventures and some big scares, and he's my Shane.

I still threaten to send him to D, though, because technically, that ain't my dog.
Posted by alpharat at 7:26 AM

I love Shane. He's the best dog ever and had an open invite to stay at my house any time.

P.S. I still need to punch that big, angry cat in the face.

I meant "has an open invite"...sorry

This is a fantastic story. I like the way that D is quick on his feet. It was obviously meant to be.
Disney should make a movie about Shane.
Seriously.
I love you guys for your big soft hearts.

Aw, a husky always needs to be freed from the shelter if you can. Good thinking! I have two huskies, one I found at a shelter, the other I bought when she was a pup, she is only half husky, she looks like a little white wolf- she is 16! Thanks for your concern for her. She had a great day today, it's a coaster ride.

He's all yours.
You know when you need someone to swindle the system, that I'm here for you.
I'm happy to be able to have increased the fur content of your household.