All my best friends are metalheads... 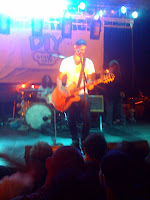 Lucero was awesome. I made my way into a pit for the first time since Flatfoot 56. I’m getting too old for pits, especially the full-blown hardcore bust-over-the-head type pits. In order for me to make my way into pits anymore, the vibe has to be perfect – the crowd has to have a positive buzz, a bunch of folks there to have a good time, and I also have to be feeling the music, too.

This one was perfect, a crowd that pleasantly drunk, just out for fun, not out for blood, just there to reel with the music, to make enjoying Lucero a common experience. And reel we did… it was perfect. At one point, during “Nights Like These,” the whole pit stopped, and shouted

“The beer tastes like blood, my mouth is numb.
I can't make the words I need to say
She had a weakness for writers, and I was never that good with words anyway.”

Then we all high-fived one another, and the music ctarted rolling again, and so did we.

Man, what is a muse?

In Greek mythology, there were nine of them, and they were goddesses who presided over the arts, and inspired the artists. But that was a long time ago, when Greek art, music, poetry, etc. was all pretty structured. Back then, as one who aspires to be a writer, I would have answered to Calliope perhaps, who was a pretty little thing who inspired epic poems. Oddly enough, her lover was Ares, the god of war, and they had kids together.

In any case, nine Muses were fine when the world was smaller and the art more rigid. But they don’t really cut it now. I think that as the world got bigger, and the poets, artists, lovers and dreamers spread around the world, the Muses found they couldn’t handle the increased workload, so they allowed the creation of more muses (not the change to the lowercase).

Somehow, for better or for worse, everyone who aspires to create now finds their own muse, one who’s always there to inspire the artists to make their own particular brand of art. Except of course when the muse is not there, which is frustrating, sometimes, but sometimes it’s also even more frustrating when they are around.

I think, as the lineage of the muses got watered down, and they got scattered throughout the world, they changed. They’re not related to one another, at least not in appearance, and they very rarely have anything in common with one another. When a muse goes away for a while, it’s a safe bet he/she’s not hanging out with other muses. Except when he/she comes back looking like he/she’s been in a bar fight. Then he/she was around other muses. Or he/she was just in a bar fight.

But where do our muses come from? Do we create them, or do we find them? Or do they find us? If we don’t create them, where are they before and after us? Do they travel from artist to artist? Or are they born with us, and will die with us. If they will die with us, what inspires muses to inspire suicidal, tragic poets to die young, unless they themselves are suicidal tragic figures who want to die young?

And if my muse is older than I am, who did he help before? I mean honestly, who would want this muse other than me? Who would really be inspired by a barefoot, dirty, towheaded, socially awkward, mildly manic, slightly offensive, pleasantly drunk muse other than me?

What’s your muse look like?
Posted by alpharat at 9:14 AM

Ah, man.
I'd settle for an obnoxious promoter at this point.

Deep thoughts on creative processing merged with mosh pitting...who knew this is what I'd find today.

"polodisi" is my word ver.
Consider that the name of my new muse.