World Series and Herds Of Ponies

I have tried to get this post up for a while, but every time I try, it gets delayed to where it's out of date, so I am just going to stream-of-consciousness it up here and go with it:

I was going to begin this post by apologizing again for not posting in a while, but:

2. I just read this post where they compiled a bunch of posts of people doing the same thing, apologizing. (That 2 may or may not have been intentional, but I'm not apologizing if it was. I won't apologize for anything today.)

Things are whirlwinding right now. Two weeks ago, I was in Chicago. It was a blur of a weekend, and rather eventful and non- at the same time. I saw a lot of great old friends, drank a lot of wine, and even sat on the banks of a river, drinking Jager Bombs and watching beavers swim by at 4 AM (which prompted a phone call to ST, a phone call that I am not apologizing for today).

I like my new job a lot, as much as anyone can like a job. It may simply be the honeymoon phase, but I feel valued here, and while I may not be curing cancer, I am doing some things that are mildly important. 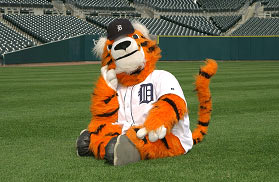 The World Series is off and running. How 'bout them Tigers? They may be down a game, but I think this is a series that will go back and forth.

It's exciting when we can get something like this in Detroit, just to get the city going and to pump some cash down there, but I'm done hoping this will be Detroit's big break. It seems like however many big breaks we give this city, they go nowhere. Casinos, new ballpark, new football stadium, All-star game, Superbowl, countless hockey and basketball championships, now a World Series… and then things will go back to normal, back to Detroit's quiet decay.

I work downtown now. I work in a big building that was designed by Albert Kahn. His work is a decent example of what's going on in Detroit.

Kahn was a prolific builder, designing well over 1,000 buildings in his lifetime, many in Detroit. He designed buildings and factories, including the Packard Plant, the Donovan building (which housed Motown Records) and the amazing Belle Isle Aquarium. He's famous in architectural circles, has around 60 buildings listed on the National Register of Historic Places, and people travel far and wide to see his work.
In Detroit, many of his buildings have been allowed to fall into disrepair, until they can't be fixed. The lucky ones are then condemned and demolished. The unlucky ones are just condemned and allowed to become silent hulks. Detroit - home of the vacant skyscrapers.

That being said, I do love this city, and I love working downtown. It has vitality still, but it's sick, and getting sicker. Hopefully somebody can find a cure before it dies.

Now that I've become thoroughly depressing, I do have some good news. Monday at St. Andrew's was the BoDog Music Million Dollar Battle Of The Bands, and although I had no idea who was playing Iwent, because I was asked to be a guest judge. It was pretty cool, plus I got some free drinks out of it. There are A LOT of awful bands out there, but I do think just about all of the bands that deserved it made it to the next round, especially In Erupt, a heavy group from Kentucky, who drove eight hours to do the show, and witnessed a knife fight when they got here. Welcome to Detroit. They were very talented and very friendly. I wish them luck.

Also, why does blogger seem to be getting less and less reliable about uploading photos?

Plus, once I again, I am getting so excited about the impending trip to Italy. Wow, Nicole's birthday in Italia? Last year was Paris, are we entering a dangerous upward spiral of birthday expectations? In a few years, I'll have to buy her an island with its own herd of ponies. Either that, or renting a roller rink for the afternoon. Either way, once I hit those two, I'll be tapped out of ideas.
Posted by alpharat at 3:38 PM

Glad to hear the Battle o'the Bands wasn't all bad.

You must lower Nicole's expectations before you're chartering a trip to the moon.

Gotta go...still car shopping and I need to throw together a pirate costume before Saturday night...

Florence? Rome? Where man, where?

Lots of pix too, even if blogger is a little bitch about posting 'em...

You know, Moose announced a month or so ago that he plans never to have children, because the world is in the crapper, and he would feel so guilty bringing a child into this shithole we call home. I remember saying the same thing when I was a few years younger than he is now. I hope he changes his mind. We gotta do what we can to make things (like Detroit, and global warming, and world hunger blah blah blah) better in our lifetimes, but the people who came before us did such an excellent job of fucking things up, that I think it's folly to expect that my generation or yours or Moose's can set things to rights, and that's why I want as many grandbabies and surrogate grandbabies as I can have. Pickles, Jack, GBabyZ -- one of them, or one who comes after them, could be The One who figures it all out and leads us out of darkness.

As I read this, the Tigers are down again, and this in game 5 -- the Make or Break game. But I'm holding out hope still. As for Detroit... not necessarily so sure, but I'll try.

Blogger has a giant explanation (excuse?) for all their issues of late.