It's been a bit of a whirlwind of ups and downs lately. I keep putting off writing about them, but if I wait too long, they pile up and I can either opt to forget about them or cram them all into one post. Which is what I'm going to do now. This is Mazzola (eating the Kitty Shoe). He is a very old friend. Nicole has known him since high school and was a part of our wedding party. He lives in Chicago now, where he;s the drummer for Piel Plastica, an excellent band that was kind enough to drive out to Detroit to play the breast cancer benefit for free.

He is also a talented sound guy who tours with bands, which lead to him calling us on Saturday. He was at the Machine Shop in Flint, an hour from us, because he was on the tour with Hank Williams III. Did we want to meet up? Definitely. 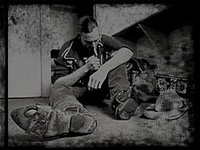 The guy played for three hours. He started his set with country (real country, the kind his grandfather played, not the watered down music of his dad), then went into hellbilly rock, and closed the set with a hour's worth of balls-out heavy metal.

It was tremendously sweet.

Simply put, I quit my day job (not the about.com gig) and got a new one. I think I'll like it much better. I don't think I can say more.

It looks like Nicole and I will be spending a week around Thanksgiving vagabonding across Italy. I have not started my Italian lessons yet, so I'm just hoping to be able to competently order a bottle of vino. Anything else is details...

If you're a beer drinker, you might want to think about switching. About a month ago, I wrote about a malting barley shortage in Europe, and the possibility of beer shortages and/or rising prices.

The situation has gotten worse. A warehouse fire in Yakima, Washington just destroyed 4% of the nation's supply of hops. This, I believe, is a conspiracy to get rid of good beer. My favorite beers are very hoppy, but a spokesman shrugged it off:

"I'd be surprised if there were any impact, because hops are a minor component in beer, and 4 percent is not an incredible percentage of the whole hops supply," said Ray Daniels, a director for the Brewers Association, a Boulder, Colo., trade group.

Sure, if you don't mind making fewer hoppy beers, and forcing everyone to drink Coors Light.

There, you've all been brought up to speed as succinctly as possible. Ciao!
Posted by alpharat at 12:50 PM