What About The Bad Guys? 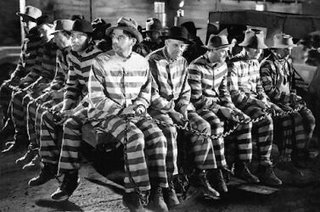 The prison system is an odd thing to me; I mean, I understand the need to take the bad guys and lock them up where they can't do bad things anymore, but then they just keep them there for a while (based on the bad thing they did) and then dump them back onto the street, where they do more bad things. Rinse and repeat as necessary.

The point of this post is not to get too deep on the nature of the prison system; I don't really know enough to get into that, but it doesn't seem like there really is any emphasis on making the person NOT do bad things any more. If anything, they seem to come out worse than they did before.

Is this revenge or is it reform?
I don't know but it shouldn't be the norm.
-I Object, "Intra Muros"

(If you've not heard I Object, you should really check them out. Serious hardcore band with a pissed off singer and really positive lyrics about all sorts of social issues. Anyway...)

Here in Detroit, it's not uncommon to see prison work crews in the city. In the summer, they're cleaning trash along the freeway. In the winter, they shovel snow - a necessity since a previous mayor sold off many of the city's snow plows without telling anyone (it wasn't discovered until a major snowstorm during a subsequent mayor's administration that the city had no snow plows and was too broke to get more).

Prisoners in the U.S. make license plates and pick up trash until they are released for the period of time needed to commit another crime and get put back in the system. It just doesn't seem like the best model for rehabilitation, does it?

In Australia, they're training prisoners to replace Steve Irwin. The Darwin Correction Centre is teaching inmates to "deal with crocodiles, repair crocodile fences, build enclosures and write reports." Aside from the report writing thing (then again, what job doesn't have paperwork?), that sounds like a sweet deal. Good luck finding someone around here to teach you to be a croc handler on the corporate dime! It's hard enough to get a student loan.

Australia has always been ahead of the game on the care and feeding of criminals; it's how they got their start, so it's no surprise that they'd still be ahead of us. But the whole idea of teaching prisoners a skill that's actually useful when they get out isn't a bad idea, but what is there to teach the American inmate? We don't 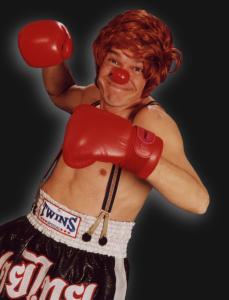 have any crocs (although if we did, I might jaywalk or spit on the sidewalk a few times just to get in that program), so what is there? Sure, I know you're thinking that clownpunching is a great idea, and while I agree wholeheartedly, how would they make a living doing that when so many people are willing to walk around punching clowns and kicking mimes for free?

I can't think of any other job that could work that isn't run by an organized labor force. What are your thoughts.

Then again, maybe Australia isn't onto such a good idea. What happens when an organized force of hardened criminals goes on a crime spree supported by a brute squad composed of trained crocodiles? They'd be nearly unstoppable.

Is it time for another Australia? A prison colony where we could send the really bad guys and force them to forge their own lives? If so, where? Granted, we could fence off Wyoming, but that's a lot of chainlink to patrol.

An island would be the best solution. In Guatemala, there was a prison that was run by the inmates for more than 10 years. They produced drugs, lived in homes with luxury goods, and had stores and restaurants. The perimeter was patrolled by guards, but the inmates ran the inside. The only problem was that prisoners lived in luxury conditions and used cell phones to control criminal empires from within. Security forces took control of that prison last week.

I don't know of any islands big enough to be the next Australia, and I doubt the Australians would like to move so we can start over. Do we send the prisoners to space? That's probably too expensive.

So what's left? Where do we put the bad guys when there's no more room?
Posted by alpharat at 8:32 AM

Reminds me -- some decades ago, some guy in Cheboygan, Michigan, committed a robbery using a large snapping turtle as his weapon. Honest! I heard it on the radio when I was on vacation up north. I also heard about a shoe store robbery -- the thief stole all of the display shoes. For years, every time we vacationed up north, I feared being robbed by a one-footed burglar.

I wish I knew where to put the bad guys. , or how to help them turn into good guys. Alas, I don't.

Australia was a nice, big, wild continent...plenty of space and basically freedom...bad idea for a prison. Who's idea was it to make a prison on a tropical island with cell phones and other luxury items?! Another bad idea.

If you're going to put a prison colony somewhere then it has to be someplace miserable...undesirable...the middle of the desert...or Antarctica. Of course, the upkeep on places in an inhospitable climate might not be worth the cost, so that should be offset by making it the prisoners' problem...

Personally, I think we need a more proactive approach. As one of the richest nation's in the world, you'd think we'd be able to stop the conditions in our society that encourage or incite crime...even if we have to start block by block...what? Oh...I've just been informed that we don't have the money or the man power for that because we're using it all to fight a war in a foreign country that's impossible to win...hmmm, that doesn't seem to be going well either.

I still say proactive is the best way to go...my point before I was interupted is...don't just punch a clown...burn down a clown college...if we can find a way to do that then America will be a better place.