It's officially a good day...

It's the first day of fall, and good news abounds...

More on the good news in a second. First I just want to say that I love fall. It's the season of Halloween and my wedding anniversary. It's the season for jeans, sweaters and jackets. It's when the air is crisp, and the season when Shane stays outside extra long, and when he comes in I grab him and give him a big hug and press my face into his fur and he smells like dead leaves and fresh fall air.

Fall is simply the best.

And now on to the first bit of good news.

First, I have to say that I am very excited about tonight. Tonight, I will be fortunate enough to witness one of those things that will be henceforth known as an event. It's a cinematic event of proportions that probably won't be topped for quite some time, and in fact will most likely become a modern standard to which modern films will be compared. It's like witnessing Citizen Kane before everyone knew Rosebud was a sled or the Blair Witch Project before you knew what it was about (I can say I did the latter one). 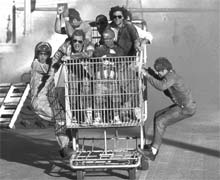 I am all over this one like a donkey on a waffle. I will get there early, at the Emagine Theater (they serve beer there), to get my tickets, and to prepare for this monumental event.

I love the Jackass guys. Not only are they geniuses for figuring out how to get paid for this, but these guys are my friends. They're not literally my friends, of course, but they are an interchangeable metaphor for my friends and I, and the assorted stupid stunts we have pulled and will probably continue to pull until we are subdued by forces beyond our control (possibly injury, but more likely... god forbid... maturity).

Now on to the next big news, on a related, but more serious nature.

This is one of those confessional blog posts that I am often against. It's where people reveal items of a personal nature because they feel protected by the anonymous nature of the interwebs. My friends who read this already know about this, so I feel comfortable talking about it here.

For years, I have been afflicted with psychological condition. My friends and family have been very supportive of me as I deal with it, attempting to (often unsuccessfully) control its symptoms. It's been a long, strange confusing trip, but it is what it is.

The medical field has now given it a name, therefore recognizing it for what it is; it's a condition, not a quirk. It's a sickness, and not a flaw, and that makes me feel immeasurably better. It makes me feel less alone.

The disease has a name. It's called Psychological Neoteny.

It's a smoking gun; the medical discovery of Peter Pan Syndrome.

It's what leads me to race my mountain bike, decorate my Christmas Tree with beer caps, carry a bacon wallet, play flameball (ask me about that some time) and to think that Jackass 2 is the be all and end all in filmmaking.

It's what makes me me, but now I have the added bonus of responding to those who tell me to grow up with a simple, "I can't. It's a medical condition."

So far, there's no known cure.

I wouldn't take it if there was.