More on the Detroit Zoo debacle 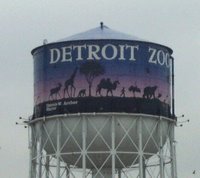 The Detroit City Council is going to continue negotiations today about the zoo they're holding hostage.

As it appears now, the basic result will most likely be that the zoo will not close, it will change hands, and Detroit will most definitely come out of this looking even worse than before.

A lot of it has to do with the whole "City vs. Suburbs" idea that Detroit has been fond of since Coleman Young was the mayor. It seemed like Detroit was finally getting past that while Archer was mayor, and then Kwame came along, and he started up a war with the suburbs again.

It's really sad that this zoo mess had to come along just as we basking in the afterglow of the Super Bowl, when Detroit made such a positive showing. And all because of egos.

The Toledo Blade did a really nice job giving an outsider's summation of the pissing match so far, as well as some of the main players:

Last week, the mayor presented the plan to the city council - which shocked everyone by voting 7-2 instead to reject the plan, which meant that the city would have to close the zoo.
Some of the council members, especially Barbara-Rose Collins, seemed to justify their vote on openly racist grounds. She made it clear that she would rather have no zoo than one that was run by whites. "This is not a plantation," said Ms. Collins, who was once a congressman until she held a fund-raiser in a strip club and lost an election to Mayor Kilpatrick's mother. "Black folks aren't owned by white folks any more," she said, in justifying her vote.
The situation was not helped by L. Brooks Patterson, the loud-mouthed executive of Oakland County, where the zoo is located. "I would rather own a '48 Buick than own Barbara-Rose Collins," he shot back, adding that the city council members themselves belonged in the zoo.
Not all the council members were primarily motivated by race, Some of the naysayers were mostly irritated with Mayor Kwame Kilpatrick, who dropped his zoo plan in council's lap at 4:45 p.m. Friday, Feb. 17 - and then left to join his mother, U.S. Rep. Carolyn Cheeks-Kilpatrick, on a congressional junket to Africa.
What was totally unclear is why the mayor thought it was necessary or appropriate to go on the junket to Africa - or why he didn't come back immediately when the zoo crisis exploded. Link

Sometimes I want to shake my head and say Detroit deserves whatever it gets, simply because these people are all elected officials.

Right now, the City Council is going over its list of demands that need to be met in order for it to relinquish control of the zoo. Again, it's all egos. They have an attraction that is world-renowned but they can't afford to run it; someone is offering to run it for them without taking it away from them, and they come back with a list of demands?

Never mind the fact that the Zoological Society already provides one-third of the zoo's operating costs, or that they are the largest contributors to the zoo for improvements, and are really the best people to run the zoo. No, the City Council has demands. Here are some of those demands:

Councilman Kwame Kenyatta proposed that the society cannot enter into subcontracts, joint ventures or joint development agreements without the approval of the city, while Councilwoman Monica Conyers suggested the contract last no longer than 12 years.
Conyers proposed that the society's 40-member board "must be more diverse" and that the nonprofit must commit to "a statistically significant number of minority vendors." Link

These are the kinds of ideas that sound really good to people unaware of this administration's history, but based on Detroit's track record of corruption, it's one more opportunity for cronyism disguised as affirmative action; one of many reasons the city is already in dire financial straits.

I seriously think that the zoo should be taken from them flat-out. It's pretty obvious the Detroit City Council lacks the responsibility to take care of a pet.
Posted by alpharat at 8:21 AM

Great blog...
I still don't feel any better about the situation, but that last comment did put a smile on my face.

maybe Kwame was going to africa to look for curious george.